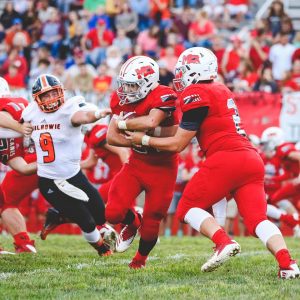 Hurricane Stadium will be the setting this Friday for a contest between two teams that are both hungry for a win.

The John Battle Trojans (1-2) will visit the Marion Scarlet Hurricanes(0-3) for a non-district match up. Although the schools are less than 40 miles apart, this will be the first game between the two teams since 1993, and only the 28th total match up. Marion owns the overall series record by a total of 19-7-1.

John Battle is coming off a heartbreaking defeat to Holston, as the Cavaliers broke a nine game losing streak to their Washington County rivals. Marion welcomes the Trojans after losing to Interstate 81 foe George Wythe last week by a score of 40-6.

The injury bug has bit John Battle hard early in this season. Senior leader Dylan Cunningham was injured last week against Holston. His status for the game against Marion is uncertain.With a season ending injury to Bryson Denton and Zane Poe still nursing an ankle injury, the Trojans are posed with questions on offense. Quarterback Jacob Hutton, however, is healthy and will look to his favorite target Gabe Blaylock to move the chains. Look for the Trojans to throw the ball early and often against the Scarlet Hurricanes.

Marion comes in with a very capable offensive line that averages 260 pounds. 300 pound Will Moss, an all-state selection in 2018, is the anchor of the line. Lining up in the backfield is quarterback Tanner Tate. Tate is averaging over 200 passing yards per game through the first three.

With both teams touting a passing attack, this game looks to come down to whomever performs the best through the air.

Will the Trojans be able to overcome the injuries to some of the main players? Will the Scarlet Hurricanes get into the win column for the first time in 2019?