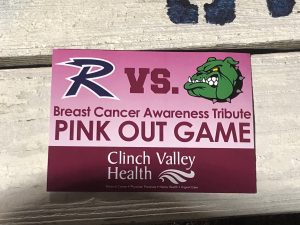 It was a “Sweet Sixteen” party for the Richlands Blue Tornado as they cruised past county rival Tazewell for the 16th straight time Friday night in the annual Backyard Brawl.

Richlands (3-3) used a pounding run game on their way to a third consecutive shutout against Tazewell (2-4) on a Friday night Pink Out game.

The dominant performance of the night came on the legs of senior running back Trey Brown. He led the Blues with 150 yards on the ground and a touchdown. Quarterback Race Moir added two scoring strikes through the air and another on the ground.

After turning the ball over three times inside the Bulldog redzone in the first half, Richlands came out of halftime and crafted one of the most impressive drives of the season. 10 straight run plays moved the ball 56 yards to the five yard line, and a strike to the Week 5 CoalfieldSports.com Offensive Player of the Week Taylor Horn put the lead out of reach.

Richlands’ line was able to dominate at the point of attack on both sides, slowing down a Tazewell offense that had put up 52 points in a win over Hurley the week before.

The talented trio of Chancellor Harris, Jamir Blevins and Week 6 CoalfieldSports.com Offensive Player of the Week Mike Jones was stymied by the Blues defensive front.

Another takeaway was backup kicker, and current Richlands soccer standout, Jay Fuller. With Levi “Fle” Forrest under the weather, Fuller stepped up with multiple touchbacks and excellent punts.

Tazewell now heads up Interstate 77 to take on the Fort Chiswell Pioneers who are fresh off the loss of star running back Denver Brown.

Richlands will host Marion in a homecoming edition of the Battle of the Storms.