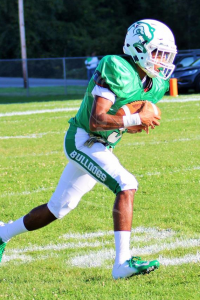 There are many things that are intimidating for a typical high school freshman.

Remembering your locker combination. Navigating your way through the hallways to class. Algebra 1 homework. Starting as a varsity running back against Hurley at “The Cliff”.

Well maybe that last one isn’t typical, but neither is Tazewell’s Mike Jones.

The freshman speedster starred in Tazewell’s inaugural trip to Hurley as he racked up 151 yards and three scores in the Bulldog’s 52-0 romping over the Rebels.

For that performance Mike Jones was voted as CoalfieldSports.com Week 7 Offensive Player of the Week. Jones is the first freshman to win the award.

“It’s an honor as a freshman to be selected for this award,” said Jones.

The long trip, the atmosphere at The Cliff and the potential poor field conditions were all major concerns for J’Me Harris’ speedy team. The Bulldogs were able to combat those concerns with a team effort that included 123 yards and three scores by Chancellor Harris and interceptions on defense by three different players.

“I was worried about the field conditions at first, it was very muddy,” said Jones. “I knew that we had worked really hard as a team and we were confident going into the game that we could have success.”

Success is what they had. The 52-0 win was the Bulldogs largest margin of victory they’ve had since a 53-0 win over Lebanon to conclude their 2017 season. Jones contributes that success to their preparation, the blocking from the offensive line and the quarterback play.

“Against Hurley the offensive line blocked well, Jamir (Blevins) made some good reads and it allowed me to make some plays,” said the freshman tailback. “We have been practicing hard, watching film and trying to take care of the little things.”

For Jones, all that preparation proved beneficial. Excelling in his second varsity start is sure to help his confidence for the rest of the season.

“It gives me the confidence that I can play at the varsity level and be successful going forward.”