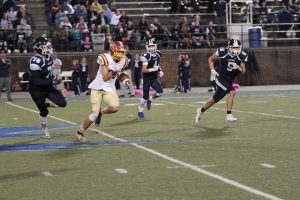 There were fireworks. There was electricity in the air. And there was the Graham defense.

The G-Men shut down a surging Richlands offensive attack, blowing past the Blue Tornado 37-10.

Graham (6-2) started quick behind a touchdown run from ODU-commit Devin Lester. But soon after, Lester was ejected for a helmet-to-helmet hit. The validity of the flag — and the ensuing ejection — depends on which end of Tazewell County you reside.

Richlands (4-4) would take advantage of the momentum shift and score on a QB sneak from Cade Simmons for what would be the only Tornado touchdown of the night.

The G-Men then turned to former Tazewell Bulldog & Bluefield Beaver QB Jamir Blevins — who went off in his first meaningful action of the season. Blevins finished the game 6-13 for 200 yards and 2 TD, adding 71 yards on the ground. His favorite target was WR Isaiah Justice, who had two catches for 147 yards and 2 TD. Former Blue Tornado Tre Booker added 140 yards on the ground.

After the game, Blues head coach Greg Mance was complimentary of the county rival on both sides of the ball.

Richlands still has plenty to play for, however. With a Gate City win tonight, the Blues would be the 4 seed in Region 2D if they win out. That begins Friday night in Lebanon, taking on a team that is coming off its first win of the season over Virginia High last week.

Look for Simmons and Steele to get the run game back on track against what has been a shaky defense for the Pioneers. Kickoff tonight set for 7pm at Lebanon Middle School.