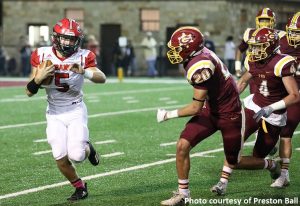 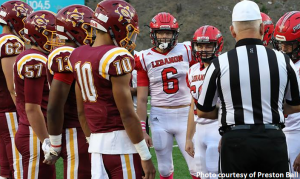 Lebanon knew they’d have to be aggressive and take some chances if they were to compete with Graham. Friday night’s SWD clash started off with an onside kick as the Pioneers tried to steal a possession from the G-Men. Graham fielded it and brought it back to the the Pioneer 44 yard line. On the first play from scrimmage, Graham WR Devin Lester came in motion and took the hand-off. His carry brought the ball down to the six yard line before Lebanon S Cole Stoots made a touchdown saving tackle. One play later Graham RB Jaziere Reed was in for the six-yard touchdown run. The extra point attempt was good and the G-Men had a 7-0 lead.

Trailing early and taking possession of the football on their own 18 yard line, the Pioneers leaned on the ground game to get things going. RB Seth Stanley carried the ball on the first two plays, setting the Pioneers up with 3rd and 1 on the 27 yard line.  After making a key stop, the G-Men lined up to receive Gabe Figueroa’s punt.

Taking the field once again, Graham RB Jaziere Reed’s power running moved the offense down to the Lebanon 31 yard line. Not to be left out, QB Cameron Allen found the open receiver in the back of the end-zone for another G-Men touchdown. The extra point was good and gave Graham a 14-0 advantage. Minutes later, Allen would again put points on the scoreboard as he intercepted a Pioneer pass and returned it 40 yards for another G-Men score.

Getting the ball back down 21-0, the Pioneer offense came out throwing. Once again the Graham defense was up to the task and created another turnover with an interception on the Lebanon 25 yard line. Immediately going for the sudden change big play, Allen again found Lester who added another touchdown catch to his stat sheet. After a successful extra point attempt, the G-Men led the Pioneers 28-0.

The Graham defense contained the Lebanon running game on the next two plays. QB Casey White found himself under heavy pressure and sacked on 3rd and 14. Figueroa would again come in to punt and did an excellent job of avoiding the rush and getting the punt off and high into the Bluefield air.

Working their way down into the Pioneer redzone, again Graham would depend on their power running game. Spreading the carries around to several backs, the G-Men kept fresh legs running at the Lebanon defense. After the Pioneers stopped Jaziere Reed on the one yard line, Cameron Allen took matters into his own hands and scored on a QB sneak. The successful 2 point conversion attempt would make the score 36-0.

Both defenses would step up and do a good job of holding the opposing offenses on the next couple of drives. Graham LB Nick Kastner found several opportunities to add to his tackle totals while Brady Waugh & Kent Musick made key stops for the Pioneers. Several plays later, Cameron Allen found a lane and took off for a 38 yard touchdown run. The extra point attempt was good and the score was 43-0.

Lebanon moved the ball out of the shadow of their own endzone to the two yard line. A sack on 2nd down forced the Pioneers into 3rd and 9. Lebanon QB Casey White almost connected with WR Caleb McGlothlin who’d beaten the Graham secondary deep.

Graham got the ball back after another Pioneer punt. Once again, the G-Men used their running game to move the ball into Lebanon territory. Continuing to take time off the clock, Graham rotated RB’s taking advantage of their depth. The G-Men run game would produce another touchdown giving them a 50-0 lead.

With the ball back, Lebanon looked to Seth Stanley to get them moving. The senior RB reeled off several nice gains helping the Pioneers move the ball towards Graham territory. The drive eventually stalled and the G-Men would takeover again after another Pioneer punt.

With time running short in the first half, Lebanon’s Dustin Baumgardner recovered a Graham fumble giving the Pioneers one more chance to put some points on the board. The G-Men ended the threat, intercepting White’s pass in the endzone. 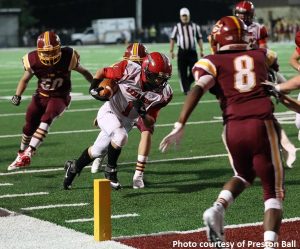 The Pioneers got the ball to start the second half and immediately looked to Seth Stanley to get them started. Stanley made several nice gains as he broke off runs of 25, 11 and 16 yards. Freshman RB Levi Thomas mixed in a few carries of his own and Lebanon was on the move. Levi Thomas would cross the goal line on a seven yard carry for the touchdown and Lebanon’s first points of the evening. The conversion was unsuccessful and the score was Graham 50- Lebanon 6.

Graham recovered the onside kick attempt that followed. The G-Men kept the ball on the ground, killing as much clock as possible along the way. Moving into Lebanon territory, the drive ended on 4th and 5 when the Pioneer’s defense stopped the G-men on the 21 yard line. 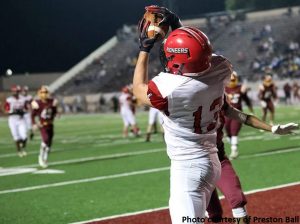 QB Casey White avoided the pass rush and scrambled for a yard on first down.  On 2nd and 9, Pioneer RB Levi Thomas got loose for a 13-yard run bringing the ball out to the Lebanon 35 yard line. With a fresh first down, White dropped back and hit WR Casey Martin on a slant route. Martin broke several tackles and set the Pioneers up with 1st&10 on the Graham 42 yard line. Thomas was able to pick up a couple of yards to bring up 2nd&8. Graham’s defense tightened and Lebanon faced 4th down on the 44. With time expiring, White took the snap and found Martin downfield on a slant & go for a 44 yd touchdown pass. Gabe Figueroa would add on the extra point and the game ended with Graham taking the W 50-13.

Knowing his team had a very tough matchup with Graham, Lebanon’s head coach Michael Webb said, “Graham was a great team. Loads of speed, played very physical. It will be great regional playoffs between teams like them, Union, Ridgeview, Richlands and a few other really tough schools in Region D this year.”

Coach Webb seemed pleased with the efforts of his young freshman RB.

“I thought Levi Thomas ran the ball well, said Webb. “We split carries between he and Stanley just to get Levi some game experience.”

“Offensively, Casey Martin blocked well and caught two great passes,” said Webb. “One the ref was out of position and called it out of bounds, the other he caught a slant and go and took it about 40 yards for a TD.”