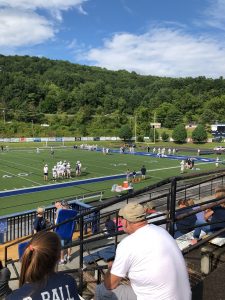 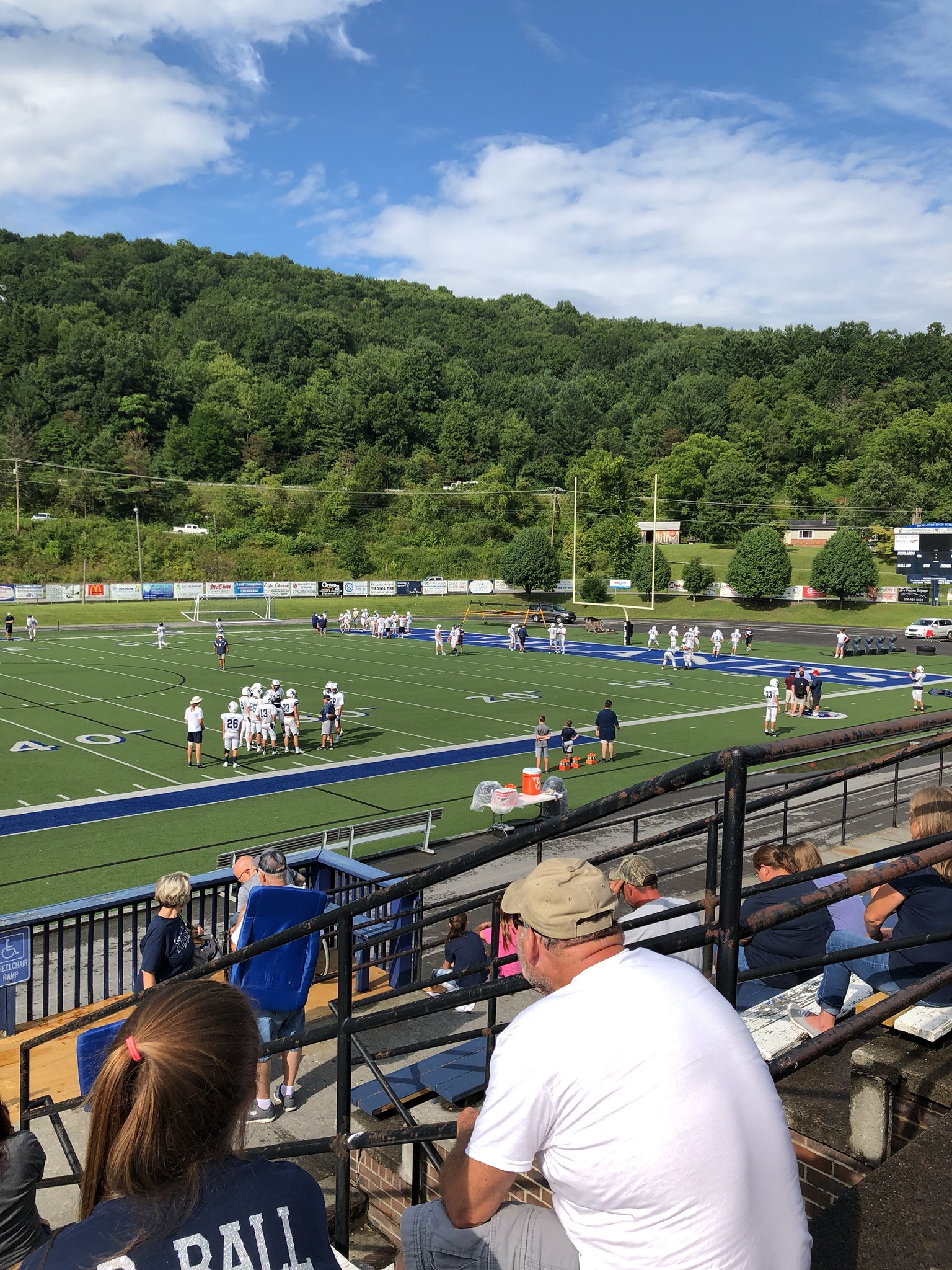 Fans show up early to catch a glimpse of the Blues during warmups.

There was a familiar scene at Ernie Hicks Stadium in Richlands on Friday night.

Pads were popping, fans were cheering, you could smell the Lions Club concession stand. That can only mean one thing: football is back in The ‘Lands.

The Blues hosted former Southwest District foe Abingdon, as well as Kentucky powerhouse Belfry in an annual jamboree that most in Richlands look forward to.

I won’t do an official recap. Instead, I’ll offer some of my thoughts on the Blues (plus the Falcons and Pirates).

Last year, the Blues started the season with Trey Brown. Moir earned some playing time throughout the season, providing sparks when he came in, but ultimately the two shared time.

Now, this is his car to drive. Brown will stand in the same backfield with him, now as a running back. (Anyone smell the HB pass opportunities besides me?)

In my estimation, Moir looks every bit the part of the prototypical Blues’ gunslinger. He’s got the arm, folks. He was also very accurate all across the spectrum. Deep ball accuracy, leading his guys across the middle on the medium throws and nailing the short ones, too.

Moir already has a favorite target. It’s nothing new. McCracken to Fuller. Strong to Johnson. Asbury to Howie.

Now get ready to hear: Moir to Horn.

It dazzled on the turf of EMats Field Friday night and it will continue to dazzle all across the coalfields this season.

The Blues were without 6-foot-5-inch WR Jakob Cole, but that allowed others to find a rhythm with Moir. Aside from Horn, Sage Webb and Logan Steele looked like solid options in the Air Mance attack. Add Cole to the mix, and there is potential to have four wideouts that demand some attention.

The running game could use some work.

That’s putting it mildly. I also attribute some of that to the line play. The Blues lost a lot on the line. That showed against both Abingdon, who seems like they will have a solid line this season, as well as the Pirates.

They also have a smaller line. It was noticeable on the field and on the roster here on Coalfield Sports.

I have full faith in the staff to get that lined out. They’ll find ways to utilize the smaller, quicker line. Until they do, look for the run game to be the weaker facet.

Yes, they gave up six touchdowns. Four to Belfry and two to Abingdon. Most of that was on the ground.

The Blues were without five starters, held out for precautions. Two of those were both inside linebackers. When you lose both of your inside guys, that opens up running lanes.

Some of it was attributed to great blocking and just good play from RB’s, too.

Overall, everyone seemed pleased walking towards the Dr. James H. McVey Field House. In catching up with members of the coaching staff, they were happy with some things they saw, and also noticed things to be worked on.

I’m not saying to book your rooms in Salem. However, I’m not going to short-sell this team that looks like it has the ingredients to make a pretty good bowl of soup.

Up next, the Blues will take on Grundy in the benefit game on Thursday night. Kickoff is set for 7:00 p.m. at Ernie Hicks Stadium.

It will be a test for the Blues defense, as the Golden Wave return QB Derrick Endicott and RB Gabe Fiser.

Look for a fun game Thursday night as Richlands takes the last step on the road to Gate City.