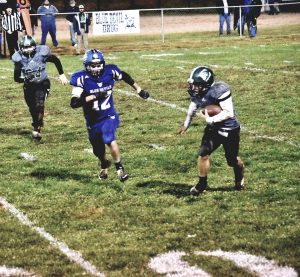 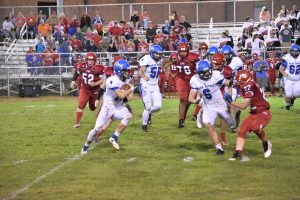 Castlewood and Eastside have met eight times since the 2011 consolidations. The two rival schools have beaten each other four times in the eight game span. Castlewood won the inaugural matchup in 2011, 24-12 and then reeled off three in a row over the Spartans from 2014-2016. Eastside squeaked out a 29-28 victory over the Blue Devils in 2017, a win that clinched the outright regular season Cumberland district title. Then last year in a downpour the Spartans took home a 28-8 win over Castlewood. 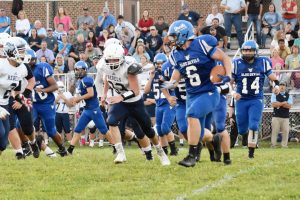 Castlewood (6-3, 2-2) is led by Junior fullback and linebacker Jeremiah Allen. Allen (6’1 210) is the Blue Devils leading rusher and tackler. Allen has ran for 871 yards and 12 touchdowns while collecting 80 tackles. Tight End Jacob Vance leads the Blue Devils in receiving yards with 124 and has caught 2 touchdown passes. Candler Dudley is no slouch running the football either for the Blue Devils. He’s accumulated nearly 600 rushing yards to go along with 8 touchdowns. M.J. Carter has added 360 rushing yards for Castlewood and has notched 5 touchdowns for coach Chris Lark. Collen Dudley probably runs more than he passes but he has tossed for 333 yards this season to go along with 3 touchdown passes. Castlewood is a physical team on both sides of the ball as they average over 250 rushing yards per game.

“They (Eastside) use a lot of formations to get the ball in the hands of Grayson Whited.” Noted Castlewood head coach Chris Lark. “We’re going to need to know where he is at all times, we have to contain and tackle because he’s dangerous in the open field.” 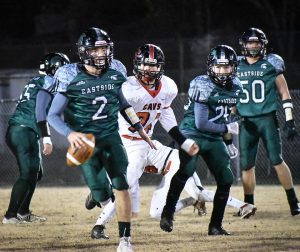 Eastside has perhaps played the toughest schedule in region 1D. The Spartans lost to Wise Central, who is currently sitting inside the top four in the Region 2D playoffs, Patrick Henry, Chilhowie and J.I. Burton. Each of those teams will hold the top three seeds in next weeks 1D playoffs. Eastside also lost to Holston last Friday who will finish in the middle of the pack in the 1D standings.

“This is a huge game for both teams, plenty of playoff implications on the line for both of us.” Said Eastside coach Mike Rhodes. “Coach Lark has done a great job turning the Castlewood program around. Their single wing offense is deceptive, the Allen kid is impressive running the ball. The Carter kid has speed and the Neece kid is physical as it gets on both sides of the ball.” 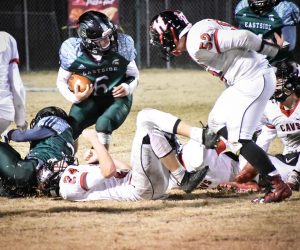 Eastside is led by Evan Bellamy who is a tackling machine. Bellamy has recorded 145 tackles on the year and has had multiple 20 plus tackles games. Grayson Whited is perhaps the most versatile player in the region as he has tallied 1,877 all purpose yards to go along with 17 touchdowns. Whited has ran for 634 yards while adding 703 receiving yards. Whited is also a game breaker in the kicking game as he has 540 combined return yards. Nick Raymond has rushed for 406 yards and 6 touchdowns while quarterback Will Stansberry has passed for 910 yards and 9 touchdowns.

“This is all our kids could ask for on Senior night, getting to play a big rival in a game that could allow you to host only the second playoff game in school history, what an opportunity, but you can bet Castlewood will be amped up because they are playing for the same things. It should be a good ole fashioned knock down drag out type of game.” Added Rhodes.

Kickoff has been moved from Friday night to Saturday evening at 3 p.m. inside Carl McConnell stadium in Coeburn.