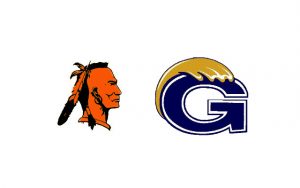 The first seven weeks of the season have provided two completely different results for the Grundy Golden Wave. After starting the season 4-0, Craig Plymal’s squad has dropped three in a row. The losing skid is the longest of Plymal’s tenure as the head coach of his alma mater. The last time Grundy lost three or more games in a row was in 2015 when Jeremy Ward’s version of the Golden Wave finished 2015 on a six game losing skid.

In the most recent outing, Grundy fell to J.I. Burton by a score of 46-19 last Friday night at Nelson Memorial Field. Once again, Grundy’s freshman speedster, Ian Scammell, led the Golden Wave with 95 yards on the ground to go along with two rushing touchdowns.

The Golden Wave will not have an easy time getting back in the win column Friday after its two hour trip to Smyth County to take on the Chilhowie Warriors.

Chilhowie is 6-1 in 2019 after coming off back-to-back Class 1 State runner up finishes in 2017 and 2018. Jeff Robinson has the Warriors clicking in his seventh season at the helm of his alma mater. The Warriors returned a total of four starters this season after losing 15 seniors off last year’s stellar run that saw the Warriors go 10-0 for the first time since 1970.

Sophomore Daniel Hutton handles the kicking duties for the Warriors and broke the long-standing school record for the longest field goal earlier this season.

Chilhowie returns home for the second consecutive week after knocking off Rural Retreat 52-14 seven days ago.

Thomas rushed for 68 yards while finding the end zone two times on the ground to lead the way for the Warriors.

Chilhowie has played a battle tested schedule in Class 1 thus far. The Warriors lone loss occurred back on September 13th in Giles County against the Narrows Green Wave by a score of 20-14.

Friday night will be the third time these schools have met up in a series that dates back to 1949. Things are currently knotted up at 1-1 with edge school taking one of the previous two matchups. Chilhowie won last seasons matchup in Grundy, 63-14.