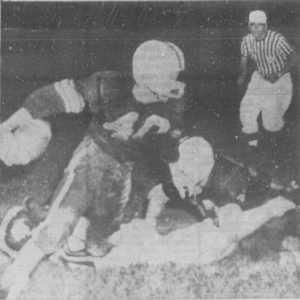 In 1958, the Graham G-Men finished their only unbeaten and untied season with a 10-0 record. Hermitage High of Henrico County edged out the G-Men for the state championship that season.

The VHSL did not have official state championship playoffs until 1970. They were done in brackets just as they are now. From 1970 until 1985, there were only three division: A, AA, and AAA. Starting in 1920, there were also three divisions; A, B and C, with A being the largest schools and C being the smallest. There weren’t that many “big” schools and they were divided up into east and west divisions. From 1920 to 1926, there was actually a playoff game between the east and west champions. The smaller two classes were divided into sections and regions. The champions of the sections could challenge the neighboring section to a playoff game. Sometimes they would play and sometimes one school would decline and the other would claim the championship by “forfeit”. These games could go on all the way to a championship game if it could be worked out. Some years it was and some years it was not.

By the 1950’s, several of the larger class B schools started to press the VHSL to allow them to join class A. By 1958, Graham and several other Southwest District schools were class A schools. This meant that these class A members had to start “beefing” up their schedules in order to meet the requirement to play at least seven other Virginia Class A schools to be eligible for the championship. Schools from the Roanoke and Lynchburg areas started appearing on Southwest District schedules and schools like Pocahontas and Rich Valley started disappearing.

Graham entered the 1958 season after a so-so 1957 campaign where the G-Men went 4-2-4. At one point, Graham was 0-2-4 so they did win their last four games of 1957 against Pocahontas, Richlands, Virginia High and Northfork. In his 10th season at the helm, coach Burrhead Bradley had senior Kenny Bourne returning to QB the G-Men. Eight other lettermen returned including Charlie Carruthers, Earl Rutherford, “Buckshot” Hale, Eugene West, Junior Devor, Eddie Kelly, Lacy Asbury and George Walker. He also had a unknown halfback by the name of Dickie Asbury (#40) make the varsity for the first time.

The following Friday at Marion, the G-Men got their second win defeating the Smyth Countians, 27-6. Second quarter scores by Buckshot Hale and Ralph Devor put the G-Men up 14-0 at the half. Both teams made third quarter TDs with Dickie Asbury scoring first for the G-Men and Bull Osbourn for Marion and it was 20-6 going to the fourth. George Walker scored on a 40 yatd TD pass in the final chapter and then kicked his third extra point in four tries and the Tazewell County boys were 2-0 with the 27-6 triumph.

On September 19th, Graham took to the road to meet the mighty Magicians of Jefferson, Sr. High School at Victory Stadium in Roanoke. Jefferson was the 1957 Virginia State Champions going 8-1. The only 1957 loss was a 40-25 setback to the powerful Dobyns-Bennett High team from Kingsport, Tennessee. Jefferson was 1-0 after defeating Pulaski 14-0 at Pulaski in the Magic City team’s opener. Jefferson had just been added to the Bluefielder’s schedule to meet the seven team requirement to qualify for the Virginia championship. After a scoreless first period, the fireworks began in earnest. Jefferson punched across an early second quarter TD but the G-Man,  Dickie Asbury, who wasn’t even on the 1957 varsity at Graham, returned to ensuing kickoff 90 yards to pay dirt to even the score at six. Jefferson punched right back and returned the Graham kick to the happy hunting grounds to go up 13-6. Asbury then tied the score when he returned a punt 84 yards for a TD. Jefferson scored once more before the half to lead 19-13 at the break. Just after intermission, Kenny Bourne hit George Walker for a 28-yard TD catch and Walker’s kick put the G-Men up 20-19. Asbury again electrified the 3,800 in attendance by breaking free for an 18-yard TD run. Walker’s kick was again perfect and the G-Men led by eight in the final frame. Jefferson added a late TD to cut it to 27-25 and that is how it ended. The G-Men had defeated the Magic City 11 in the school’s most important victory ever.

After the thrilling victory over Jefferson, Graham hit the road again to face their county rivals in the Tazewell Bulldogs. The county seaters were undefeated at 2-0 and coming off of a bye week. The Bulldogs had previously defeated Virginia High 13-0 and Grundy 33-6. Late in the defensive minded first quarter, Buckshot Hale tacked a Bulldog runner behind the goal line for a 2-0 lead for the G-Men. After the free kick, Kenny Bourne hit George Walker on a 48-yard TD pass] and after Walker’s kick it was 9-0 in favor of Graham. In the second quarter the dogs came barking back, taking two Graham fumbles and turning them into two TD’s and one XP. It was the Bulldogs at the half, 13-9. Midway thru the last period Bourne hit Asbury on a leaping 26-yard TD pass and after Walker’s PAT it was 16-13 Graham. The Bulldogs took the ensuing kick and marched thru the Graham defense. As the clock went under a minute, the Bulldogs hit a long pass to the Graham 18 while  piling on penalty to boot. Since there was no half the distance rule in 1958, the penalty put the ball on the Graham 3. Out of time outs, the Dogs had time to run two plays with the last one stuffed at the one-yard line by the G-Line and the perfect season was preserved by the narrowest of margins.

Over 6,000 G-Men faithful filed into Mitchell Stadium the following Saturday night for their first official home game vs. the 1957 Southwest District Champion R. B. Worthy Shakers from Saltville. The undefeated Shakers had rolled over Hurley and Chilhowie and edged Richlands 19-18. Bourne scored first on a QB sneak late in the first period. Worthy countered with a sneak of their own to tie the game at six early in the second. It was then that the G-Men started lighting up the scoreboard. Asbury returned his second kick of the season for a TD going 89 yards. After a turnover, Buckshot Hale scored from the one for Graham. There was no more scoring before the halftime gun sounded and the G-Men went to the locker room up 18-6. After the Saltville kick, the G-Men took over on the 36 and Asbury immediately took off to end zone for a 36-yard TD run. Saltville fumbled again late in the third and Hale again punched it in from the one to give the G-Men a 30-6 lead early in the final frame. Graham tallied one more time in the fourth on an 18-yard pitchout to Eugene West. Walker picked up a bad snap and ran it in for the extra point. Don Price caught a late TD for the Shakers and the G-Men were 5-0 after the 37-12 final.

The scoreboard kept on ringing up the points for Bradley’s boys as the thumped Grundy the following Friday in Bluefield. By the time the dust cleared it was 45-6 in favor of the men from West Graham. It was 13-0 after one stanza and 25-0 at the half. The G-Men piled up 450 yards of offense (all but six on the ground) to only 143 for the Golden Wave.

The G-Men hit the road into the Mountain State to take on the Mullens Rebels at Ruby Field. Graham stunned the homecoming crowd by completely shutting down the Rebel attack in the 36-0 shutout.Asbury started the fun with a 68-yard run to the house. Bourne and Walker hooked up on two second quarter TD passes and it was 18-0 at the half. Hale scored on short run and Walker and Bourne hooked up for their third TD pass of the game and it was 30-0 after three. The second string scored in the last period when Maynard Jessie scored from the one yard stripe.w

The following week, the Blue Tornado came roaring into Mitchell Stadium but went back home wiping the dirt from the heals of Graham halfback Dickie Asbury. It wasn’t all peaches and cream for the G-Men as Gerald “Big Red” Bobbitte got the scoring under way for Richlands with a two yard run. Dick Cranwell’s kick gave the West Enders a 7-0 lead. Early in the second, after a Graham interception, Borne hit Asbury for a 20-yard score and it was 7-7 after Walker’s kick. With just under two minutes to go in the half, Richlands blew into the end zone again on a five yard Dickie McGee run and led 13-7 after the kick was blocked. The unhappy faces on the Graham side didn’t last long as Asbury picked up the bouncing kick and returned it 77 yards to the promise land for his third kickoff TD return of the season. The Walker kick was good. Asbury scored in the third and fourth periods from 12 and 15 respectively to sew up the 27-13 victory.

The Virginia High Bearcats came rolling into Bluefield on the next Saturday. Two first quarter scores lifted the G-Men to a 12-0 lead and they were never challenged. Devor scored on a pass reception from Bourne and Asbury scored on a four yard run to put it away early. Hale scored in the second period from the two and Asbury ran his point total on the season to 102 with a 4th quarter score. The final read 26-0.

On Thursday, November 10th, the G-Men ran their record to 10-0 pounding the hapless Northfork-Elkhorn Blue Demon 47-0 at Mitchell Stadium. Asbury scored four more TD’s to run his season’s total to 126 when he thrilled the 5,000 faithful with scoring runs of 20, 44, 43 and 30 yards. It was the first and only perfect season in Graham football history. They would have to wait for the outcome of games in Richmond and Norfolk to see about a state championship.

The point system in 1958 was rather interesting. Division A team standing were determined only by matches vs. other Virginia Division A schools. Graham’s three out of state games did not count. The system worked like this. Each week all 50 Division A teams were listed in order by winning percentage. You were given points determined by where on the chart your defeated opponents were listed. A few examples. If you beat the number 1 team, you were given 50 points. If you beat the number 2 team, you got 49 points and so on down the line. Then your points were divided by the number of Division one games played. Going into the last week of the season Norview of Norfolk had the championship locked up. All they had to do was beat Oscar Smith and there was no way the other two undefeated schools from Hermitage or Graham could catch them. The best made plans often go astray as the Pilots and Tigers played to a 6-6 tie. As it turned out, Hermitage’s opponents did much better and moved up on the scale giving Hermitage a better average than Graham for the 1958 season and Hermitage was state champion. Nevertheless, it was the first and only perfect season for the G-Men. 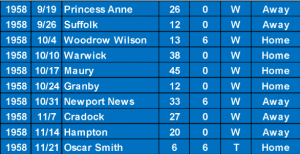 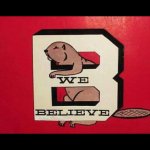