Pearisburg will look like a ghost town Friday. Why you may ask? All of the Spartan fans will be at Harry Ragsdale Field in Narrows. Giles (1-2) will travel five miles down 460 to face their arch rival, Narrows (3-0). While the series is lopsided, this is always an exciting game with a huge turnout.

2002 was the last time the Green Wave was victorious against the Spartans. Narrows won the contest 28-21, but since then Giles has won fifteen straight. Since 1980, the Green Wave have only conquered Giles four times.

Narrows’ only regular season loss in 2017 was 35-0 shutout at the hands of Giles. Both teams come into this game with same record as last season.  While the Wave has a better record, the Spartans play a tougher schedule featuring 4A powerhouse Blacksburg and 2A powerhouse Graham.

Leading the way for the Narrows is senior quarterback Wyatt Freeman. The signal caller led the Wave to a district title and to the Regional Championship game last season where they fell to Galax, 28-27. Narrows finished with a record of 11-2, which is their best record in over two decades. 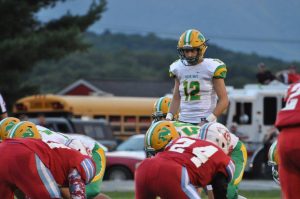 Through three games this season Freeman is 19-of-33 through the air for 370 yards and five touchdowns. Narrows has wins over Auburn, Bland and Montcalm (WV).

The Spartans battled many injuries in last week’s loss to Graham. Kicker Preston Whitlock and tailback Chaston Ratcliffe both left the contest early due to injuries. The extent of their injuries and probability of playing against Narrows is unknown. 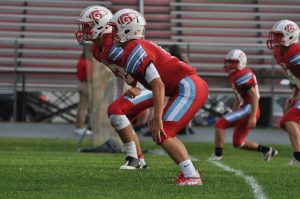 Linebackers Jacoby Wilson and Ty Lowery want to hold their county foes scoreless for the second year in a row. (photo by Shannon Lowery)

The train horn will blare and the cowbells will ring at Ragsdale Field. The game is set for Thursday, September 13th at 6p.m..