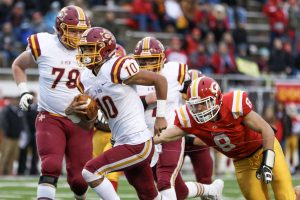 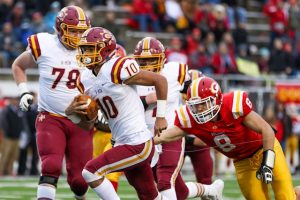 Saturday was the type of day for the Graham G-Men that a storybook could not depict any better.

Bed sheets hung from bridges in Bluefield, Virginia during the early morning hours on Saturday with messages of well wishes spray-painted on their fabric extending towards the G-Men football team.

“We worked hard all week. We were ready to go,” Palmer said. “We are excited and ready to take this trophy back to Bluefield, Virginia.”

The fact that it was Carlock’s birthday is something that Palmer and his team noted earlier in the week. It was something the G-Men did not take lightly.

“It’s special because today was coach Glynn Carlock Sr.’s birthday. It meant something for us,” Palmer explained. “It meant something especially for me since I played for him. I thought it would be a very special day for us to win it on his birthday. That is the icing on the cake for us.”

Perhaps the baker who mixed the cake batter and put the final touch of icing on the same cake was none other than the Graham signal caller.

In just the latest episode of a 15-week clinic, G-Men quarterback Cameron Allen picked up 174 yards and two touchdowns on the ground while adding 157 yards and two more touchdowns through the air.

“This is the best feeling I have ever felt in my life,” Allen said. “We are gonna celebrate tonight and hopefully order our rings!”

Allen began his assault on the Bulldogs began with 7:04 left in the first quarter. The Purdue-commit sprinted his way into pay dirt to put the G-Men on the board on the end of a 10-yard touchdown run to give Graham the lead for good at 7-0.

The second quarter brought sign of Goochland life as the Bulldogs drove inside the Graham 20 before stalling out. Jacob Hayward pierced the uprights on a 26-yard field goal to cut the Graham lead to 7-3.

Graham showed they too had strength in the kicking game when Joey Dales pushed the G-Men lead back to seven with a 30-yard field goal of his own. After Dales successful kick, Graham led 10-7.

Graham did not slow it down before the break.

With 23 seconds left in the second quarter, Allen zipped a dart to Devin Lester, who finished the contest with 141 receiving yards, from 23 yards out for another G-Men score. The fans from Bluefield, Virginia went bezerk as their boys took a 17-3 lead at the half.

More history was made in the third quarter when Graham found the end zone once again.

With 4:42 remaining in the third, Allen went to the air again to find Tre Booker on a 16-yard touchdown toss to increase the Graham lead to 24-3. This touchdown, however, was historic. With his 60thtouchdown of the season, the 6-foot-1, 185-pound quarterback moved into third place in VHSL history for most touchdowns in a season. Allen finishes his career behind VHSL legends Ronald Curry (Hampton, 76, 1996) and Vic Hall (Gretna, 65, 2004) on the list.

“I knew going into the game that I was only three touchdowns away from being third all time in VA history,” said Allen. “That wasn’t even my objective. I wanted to come out here and do what we do and that was to get a state championship.”

While the state championship was in sight for Graham, the Bulldogs did not quit.

With 31 seconds left in the third, Hunter Willms galloped into the end zone for the lone Bulldog touchdown of the contest. Goochland’s extra point was blocked by none other than Graham’s Allen to make the score 24-9.

The fourth quarter got underway as nightfall overtook Salem Stadium.

However, in the final stanza, it was more of the same.

With 3:07 left in the fourth quarter, Allen added the exclamation point with a knockout punch.

Allen took off like a jet plane from the Roanoke-Blacksburg Regional Airport on a 37-yard gallivant to the end zone to put the cherry on top for the G-Men.

As the clock ran down to zero, Palmer received the Gatorade bath. Former National Football League and former G-Men running back Ahmad Bradshaw was in all smiles on the Graham sideline. Allen cried tears of joy. Graham had handed Goochland its first loss of the season in a 31-9 decision. 23 years later, the Graham football program was at the top of the mountain.

While Palmer was quick to credit his team, Allen was quick to deflect the praise right back to the coaching staffs preparation.

“Our coaches got us really prepared. We were in the film room a lot,” Allen stated. “We stayed focused throughout the whole week and executed when 4:30 came around.”

At the end of the day, Allen also gave much deserved respect to the opposition.

“Our coaches kept telling us that we had to keep putting it on them. This team (Goochland) is not gonna go away at all,” Allen said. “We had to keep playing hard until the final bell rang.”

The long week of preparation was enough for Graham to make Goochland fret.

“We knew what they were going to do. Whenever they couldn’t get things going, you could see them try and change their element,” Allen said. “You could tell they were trying to back off and not let the deep threat happen. We started to run the ball up the gut. Everything worked out for us.”

Like many nights, Allen stole the show. However, the Graham defense did not exactly play second fiddle.

“Our defense played well all night. They kept giving us the ball,” said Palmer. “We weren’t going to quit. If we had to play eight quarters, we would’ve played eight quarters if that is what it took.”

As any football coach will tell you, Palmer was also quick to point out the missed opportunities.

“I felt like we left some points off the board,” Palmer explained. “As long as we got more points than them when this thing is over, that is all that mattered to us.”

The past two weeks have seen teams from both sides of the state line in Bluefield play for the gold. While Bluefield fell to Fairmont last week, Graham brings back the gold to a community that is waiting in open arms.

On Carlock’s birthday, the memories for Palmer were unexhausted. With the win Palmer can now sit a state championship ring beside his 1989 Graham state title ring where he was the running back.

“I don’t know what to think. It is special to win it as a player and have those memories,” Palmer said. “I get that feeling again as a coach. The best part about it for me is getting to see my kids smile. That is something they will remember forever.”

The Cam Allen era at Graham could not have ended better. Like his coach, the brightest G-star also offered reflective thoughts following his best day on the gridiron to date.

“I look back at all the practices all the way back to freshman year. All the prayers, team meetings, film rooms, all that adds up,” Allen said. “When you do all that correctly and stay focused, this is what the outcome is gonna be.”

That outcome, as Allen said, had many different variables in the equation.

“We have so many playmakers on the team. Everybody is going to do their job,” the Purdue commit said. “I think that is why we are a dangerous team. That is why the outcome was that it was today.”

On this day in Salem, nothing could go wrong for Graham.

“The kids sold out for the program,” Palmer said. “And it showed.” 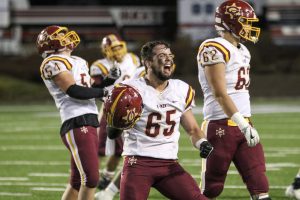