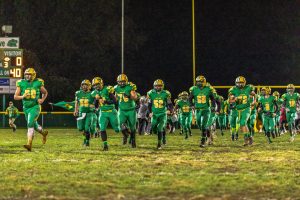 Narrows (8-1, 4-0) hopes to return home Friday night from Buena Vista as back-to-back Pioneer District champions. While Narrows is the current front runner in the district, a loss to Parry McCluer (5-4, 3-1) would make the Wave have to share the title with McCluer and Covington. Narrows defeated the Fighting Blues last season 40-14. 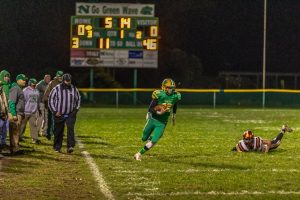 While Freeman prefers to throw it, he is not afraid to use his legs to pick up yardage (photo by Chris Lang)

Leading the Wave to an impressive 19-3 record since 2017 is senior quarterback Wyatt Freeman. Freeman is in the Timesland top 10 for passing yards. He completed 79-of-126 passes for 1,302 yards through nine games. He’s thrown for 16 touchdowns and only one interception. He also rushed for 329 yards and four touchdowns.

His go to receiver is Chase Blaker. Blaker has 21 receptions for 574 yards and eight touchdowns, averaging 27.3 yards per catch. He is just as good on defense as he is on offense. He currently leads the Timesland in interceptions with eight. In last week’s 49-6 victory over Bath County, Blaker returned an interception for a touchdown.

Leading the rush attack for the Green Wave is Matthew Morgan. Morgan has 698 yards rushing on 113 carries, averaging 6.2 yards per carry. He is also the place kicker for Narrows and ranked in the Timesland top five in scoring with 115 total points.

Narrows has a stingy defense to go along with their high powered offense. Narrows has given up just 12 points per game. McCluer running back Marcellius Dawson will have a tough night running against the best defense the Fighting Blues have played this season. Dawson leads the Timesland in scoring with 23 total touchdowns and is in the top five for rushing. He has 1,255 yards rushing on the season. He is averaging 7.2 yards per carry and 157 yards per game with 19 rushing touchdowns. He is also a top three receiver for McCluer. He has 13 receptions for 330 yards and four touchdowns.

Not only will this game decide who wins the Pioneer District, it also has a huge affect on the Region 1C rankings. Narrows clinched the number two seed behind Galax. A win over the Blues along with Galax losing to Grayson, gives the Wave a slight chance of reclaiming the number one seed. Parry McCluer has the fifth seed behind Covington. A loss to Narrows could move them back to the sixth seed and they will have to travel for the first round of playoffs. A win over Narrows could move them up to the third seed in the 1C rankings, giving them a chance to play at home for the first round.