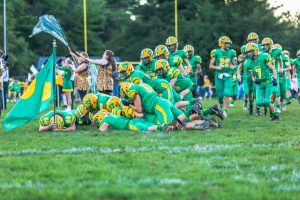 Narrows (6-1, 2-0) got their first shut out of the season, defeating the Eastern Montgomery Mustangs (2-5, 0-2) to remain unbeaten in the Pioneer District.

Wyatt Freeman, who surpassed the single game passing record last week, threw for 143 yards and a touchdown through the air while adding one on the ground. In the first quarter, Freeman connected with wide receiver Chase Blaker. The Green Wave receiver shook off his defender and sprinted 75 yards for the Green Wave’s first score. After a blocked extra point, Narrows lead 6-0. Blaker finished the game with five catches for 131 yards.

The Mustangs started rolling in the second quarter when quarterback Dylan Owens carried the ball on the end around into the end zone but a holding penalty negated the score.

Matthew Morgan got the second score for the Wave, punching it in from five yards out. After a failed two-point conversion, Narrows went into half with a 12-0 lead.

Neither team showcased much offense in the second half. The Green Wave did get another score in the fourth when Freeman scored on the ground. After a successful two-point conversion, Narrows put the game out of reach with a 20-0 lead.