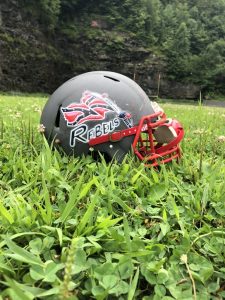 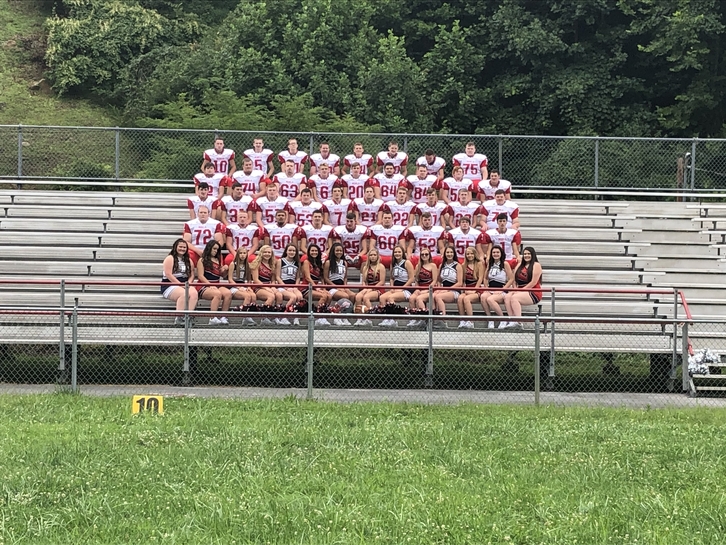 Things will be different at The Cliff this fall.

For the first time since 2006, a new head coach will lead the Hurley Rebels onto the gridiron. Greg Tester, who led his alma mater to a 73-57 record in his 12-year tenure, announced his resignation back in January.

Anthony Church, who served as an assistant under Tester, has taken over as the head ball coach at Hurley.

“I am grateful for this opportunity to be a head football coach. Especially leading the Rebels,” said Church. “The community involvement and support for their football program is unbelievable. I have had several people make the transition to head coach easy.”

Church also said that Tester has been there to answer any question that the rookie head coach has on the day-to-day life of a head coach.

Luckily, Church was able to keep key parts of a Hurley coaching staff that helped lead the Rebels to their best seasons in recent memory under Tester.

“Veteran Jack Compton is still on the coaching staff and has been an asset to me and our young coaches. He gives us 30 years of coaching experience,” said Church. “John Paul Justus has been a long time assistant at Hurley and has also helped me settle into my new role.”

The Rebels not only lost their long time head coach, but they lost a playmaker at quarterback in Tayten Sykes. The quarterback was crucial in Hurley’s playoff runs in 2016 and 2017.

“Tayten Sykes was a very explosive player,” said Church. “ He—replacing Tayten Sykes is going to be tough, Tayten was a scoring threat anytime he touched the ball.”

Behind Sykes, the Rebels also faced some key losses to graduation. However, Church does not see this to be as detrimental as one would think.

“Our team has a nice blend of veteran players, mixed with young players that are hungry to keep the winning tradition alive at Hurley,” said the Head Rebel. “We have five seniors that have been apart of some successful teams and are now ready to step up and play leading roles.”

On offense, Hurley looks to three-year starter Taylor Justus at tight end to make an impact. Justus has been the go to for the Rebels in their aerial attack in recent years. He has been very diverse, having lined up at tight end, wide receiver and in the slot. On the offensive line, Jacob Sutherland, John Justus and Trevor Dotson return after starting a season ago.

In the backfield, sophomore Chad Justice will assume the duties at quarterback in the Rebels’ Wing-T offense. Justice’s arm strength and accuracy improved tremendously throughout the offseason after participating in several 7-on-7 tournaments. Behind Justice is a stable of hard-nosed tailbacks, led by sophomore Matthew Blankenship, who started as a freshman in 2017. 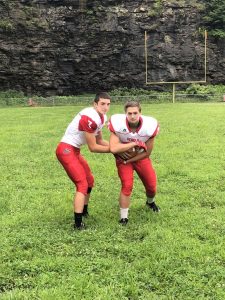 Justice and Blankenship will lead the Rebel offense in 2018. Photo: Brady Hess

“I told Matthew after the playoff game last year that I have never seen a kid improve (like he did) in a short amount of time,” Church said. “He has power and great field vision. He gives us an explosive threat between the tackles.”

The Rebels will also slide a trio of juniors, Jonathan Hurley, Anthony Stevens, Dustin Stinson and sophomore John Justus into the mix at wingback and halfback. The Rebel backfield looks to be full of speed with some power to run the ball inside the tackles.

Taylor Justus headlines a receiving group that includes Tyler Young, Keaton Matney and Dylan Hall. Hall made the move from guard to tight end over the summer to help the Rebels with their outside blocking. However, Hall impressed the Rebels staff with his catching ability, which made the move a no brainer.

Defensively, the Rebels unit will feature more experience than it did a season ago.

“Last year, our kids were young,” Church said. “ We started several sophomores and a couple of freshman in the secondary. We experienced several growing pains throughout the season, but our kids kept a great attitude and became better each game.”

At linebacker, the Rebels will rely on a group of hard hitters. The unit consists of Matthew Young, Dylan Hall, Matt Blankenship and Chad Justice.

The Rebels secondary that was full of youth a season ago, enters 2018 still young but also as an experienced group. Jonathan Hurley, who has proved to be a run stopper out of the defensive backfield, will lead the defensive backs.

The best way to describe the Rebels heading into the season opener with Rye Cove is young and experienced.

The Rebels have a large junior class and a handful of seniors to lean on during those learning experiences.

“Under those five seniors, we have 18 juniors that love the game of football,” said Church. “It is a big class of talented young men that have a blue-collar work ethic.”

With all the new faces in Hurley, do not look for the expectations and identity of the football team to change.

“Hurley is a great community. The school has a great administrative staff and great kids,” the first year head coach said. “Greg established a winning tradition at Hurley, my job is to carry on that tradition. Our expectations are to do what Hurley has done the last 10 years. That means to play solid, fundamental football with excitement and passion.”