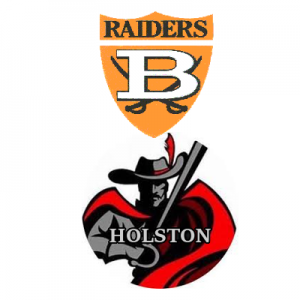 The Burton Raiders and the Holston Cavaliers clash in the first round of the 1A Region D playoffs this Saturday. The home standing Raiders, the third seed, look to keep their momentum going in the playoff opener after winning eight straight games after starting the season 0-2. Holston comes to Norton looking to make the second round of the playoffs for the first time since 2009. The Cavaliers faltered slightly to close the season, losing three out of their final five games, but hope to return to their early season form.

The Raiders, who won the Cumberland, rely on senior leader Houston Thacker to run the offense. Thacker is the straw that stirs the drink for the Burton offense, relying on his veteran presence and his excellent throwing ability to dissect a defense. Thacker isn’t the only option for the Raiders by any metric, as bruising fullback Mikey Culbertson punishes opposing defense for sitting back and trying to stifle Thacker. On the outside, Thacker’s favorite target is receiver Derrick Allen, who has flashed big play ability downfield as well as knowing where to be to move the chains in crucial spots. The defense is led by Culbertson at linebacker and has found its groove to end the season, as the Raiders have allowed a total of six points in their last three games.

That defense will be tested early and often by the visiting Cavaliers. Led by senior dual threat quarterback Leo Ezzell, Holston is capable of beating opposing defenses through the air and on the ground. Ezzell is capable of throwing a laser downfield for six or taking off from the pocket and scampering for scores. Ezzell is not the only weapon for the Cavs, with running back Ethan Guerrero being a big play threat every time he touches the ball. Guerrero has scored as a runner, out of the backfield, as a receiver in the passing attack and as an electric return man. The defense has been gashed at times by the big play offenses of Chilhowie, Narrows and John Battle but smothered teams from the Cumberland. Holston is undefeated against Cumberland foes, taking down Twin Springs, Castlewood and Eastside. The Spartans scored 36 points against the Cavaliers but allowed 52 points in the defeat. If Holston is going to upset the Raiders, the defense will have to shut down the big plays from Burton and get off the field so the potent offense can strike.