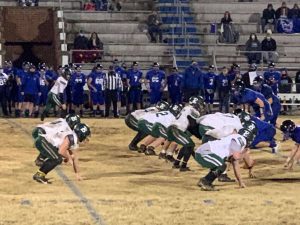 Coming off of a 2-8 season, not many folks were looking at the John Battle Trojans to go in to Legion Field and beat a Gate City team that earned a playoff berth last season. The folks from Exit 7 would have told you otherwise. John Battle’s Jack Thurston ran the veer to near perfection on Monday night in the 16-6 victory over the home standing Blue Devils. 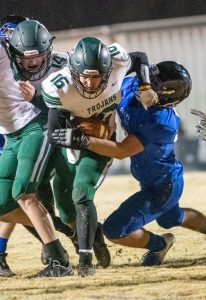 As tough and hard nosed as the Trojans offense was, the defense may have been just as good. The defense limited Gate City to only 84 yards of total offense. 47 of those yards came through the air for Gate City as a busted coverage assignment on Battles end resulted in a touchdown reception for Gate City’s Matt Gose late in the game. Gate City only totaled 10 yards rushing and 84 yards passing in the game. Dominating the line of scrimmage on both sides, Battle ran 66 plays on the night while Gate City only ran 31 plays. Battle had 56 rushing attempts for 221 yards out of the veer offense. Thurston put the Trojans on the board just before halftime with a touchdown pass to tight end Nick Lail to give Battle an 8-0 lead going in to the locker room. Thurston then put the finishing touches on the game as he scored on an 8 yard keeper with a little over six minutes remaining in the contest to extend the lead to 16-0. Gate City’s Luke Reed would find Matt Gose on a blown assignment to put the Devils on the board. It would be too little too late as the Trojans would hop in the victory formation and start their season off 1-0.

Thurston would lead the Trojans on the ground with 87 yards on 17 carries with one touchdown while Zack Moore would tally 60 yards on 18 carries. Shannon Wohlford would add 54 yards on 15 carries on the night for Battle. Thurston also tossed for 45 yards and one score. Luke Reed would complete 4-13 passes for Gate City for 74 yards and one touchdown.

Battle will stay on the road as they will travel to Norton to take on the Wise Central Warriors in a battle of 1-0 teams. Gate City will hit the road as well as they head to Abingdon to take on the Falcons in their season opener. Both of those games will take place on Saturday.