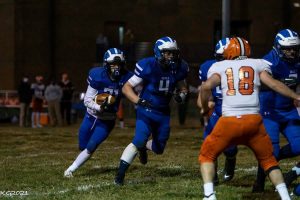 Castlewood used a three headed rushing attack of Landon Taylor, Mickey Carter and Jeremiah Allen to storm their way past county rival Honaker on Tuesday night. Taylor and Carter combined to rush for 225 yards and three touchdowns on the evening as Castlewood dominated the line of scrimmage on both sides of the ball. A dominating defensive effort that limited Honaker to 42 rushing yards on 39 attempts was led by stand out linebacker Ben Neece with 10 tackles. Jeremiah Allen chipped in with 8 tackles on the evening and a blocked punt that he returned six yards for a touchdown. 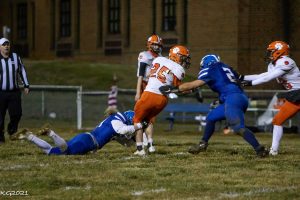 Taylor started the scoring for the evening as he dashed 40 yards to paydirt to put Castlewood up 6-0. The lead would soon double as Allen plowed into the endzone from two yards out to make the score 12-0. After continuously smothering the Honaker offense, Castlewood would take an 18-0 lead in to the locker room after Carter scored on a 30 yard score with just under two minutes remaining in the half. Carter would break free for a 51 yard score midway through the third quarter. Adam Gibson was true on the PAT and the Blue Devils led 25-0. After forcing Honaker to punt on their ensuing possession, Allen stormed through the line to block the Tiger punt and return it 6 yards for a touchdown. Gibson would once again knock in the PAT and Castlewood would take a commanding 32-0 lead in to the fourth quarter. Late in the fourth quarter Allen would add his third touchdown of the night on a 3 yard plunge to make the final score 38-0. 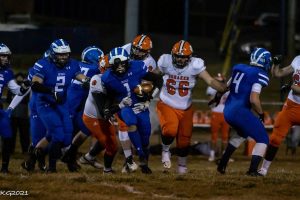 Mickey Carter tries to escape the grasp of a Honaker defender

Honaker looks to get their first win of the season as they host Lebanon on Saturday. Castlewood gets a bye week that allows them to prepare for a big early season showdown with Cumberland foe J.I. Burton on Friday March 5th at Castlewood.