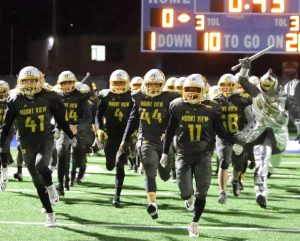 The #3 seed Mount View Golden Knights will host the #6 Williamstown Yellow Jackets in round two of the WVSSAC class A playoffs, tonight at Anne S. Hunnicutt Stadium in Princeton, WV.

Coach Larry Thompson’s Knights, who are in the playoffs for the first time in the last ten years, advanced to round two after a huge fourth quarter scoring output to down Ritchie County last Friday, 34-14. Led by a 160-yard, four touchdown performance from their senior captain Elijah Barner, the Golden Knights’ were able to secure their first playoff victory since 2003.

Mount View held a 13-6 halftime lead over the Ritchie County Rebels, before falling behind 14-13 in the fourth quarter. With around six minutes left to play, the Golden Knights meticulously marched the ball down the field until Ritchie County was able to force a 4th and 10 at their own 20 yard line. That’s when sophomore quarterback Jesse Rose found Barner on a route out of the backfield for a 11-yard pitch and catch that gave the Golden Knights a 1st-and-goal. Three plays later, Barner finished off the drive when he stretched the ball over the goal line for what proved to be the game winning score. The Knights held a 21-14 lead at that time with three minutes of game time left.

On the subsequent drive, Mount View defensive back Jasauni Saunders stepped in front of a Rebel pass for an interception and returned it to Ritchie County’s 29 yard line. On the next play, Barner tacked on another touchdown on the ground to give the Knights a 28-14 cushion.
The Rebels fumbled the following kickoff and the Knights recovered and took over on the Ritchie County six. Barner bullied through the line for his fourth score of the night to finish off the scoring at 34-14 and allow Mount View it’s first trip to the second round of the playoffs in 15 years. 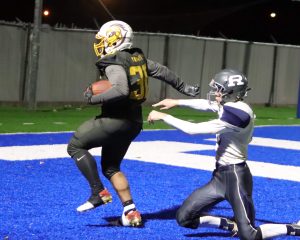 Terry Headen added 61 yards on the ground and the game’s first score for the Knights. Ty Powell finished with 105 yards rushing to eclipse the 1,000 yard mark on the season. Powell also anchored the defense from his end position, totaling eight tackles and a fumble recovery, while applying constant pressure on Rebel quarterback Zack Cline. Barner chipped in 12 tackles on the night, while Saunders added 5 tackles and an interception.
“I’m so proud of everyone involved with Mount View football,” said head coach Larry Thompson. “It was a huge first round victory. Our team battled all night long.” 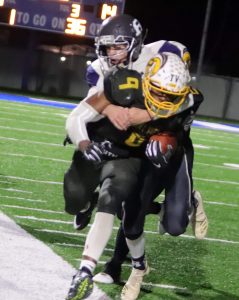 The road to championship weekend at Wheeling Island Stadium will not get any easier this week, as the 9-2 Williamstown Yellow Jackets make the three-hour bus trip from their northwestern town that’s nestled on the Ohio River.

The Yellow Jackets reached round two by racking up 277 yards on the ground to down visiting Summers County, 27-12. Williamstown was led by tailback Donathan Taylor, who finished with 151 yards on 25 carries and the game-sealing touchdown with 6:30 left in game. Dual-threat quarterback Carter Haynes had an impressive game, rushing 16 times for 115 yards and a score on the ground, while completing 7-of-9 passes for 97 yards and a touchdown. The sure-handed Nick Bondi was on the receiving end of Haynes’ touchdown pass, when he made a diving 14-yard catch in the end zone.

Summers County is the only common opponent between Mount View and Williamstown. The Knights were able to come away with a 34-13 win over the Bobcats back on September 13th. This is Williamstown’s 18th consecutive playoff appearance. They have played for the state championship six times in that streak, taking home the gold in 2008 & 2014.

Game time for tonight’s second round matchup is 7:30 P.M. at Anne S. Hunnicutt Stadium in Princeton.

“Thank you to our administration, our athletic director Larry Barber, and all of the Mount View alumi and fans,” said coach Thompson. “We have the best support system in southern West Virginia!” 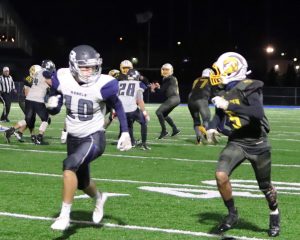 **Special thanks to Leah Long for use of her photos.