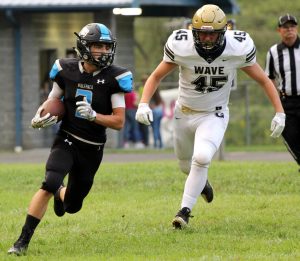 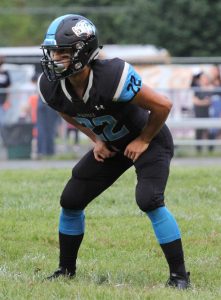 One of the questions heading into the 2018 season opener for the Ridgeview Wolfpack was if a passing attack would compliment their excellent ground game.

The answer after Friday night would be yes!  The Wolfpack were able to go to the air effectively as well as the ground to dispatch the Grundy Golden Wave to kick off the 2018 season.

McKenzie Sproles started at quarterback for the Wolfpack. However, Tyler O’Quinn took over in the second quarter and was the signal caller for the majority of the contest. O’Quinn would finish the night a perfect 5-5 with two long touchdown throws to Matthew Sexton.

On defense, the Wolfpack stymied Grundy running back Gabe Fiser and contained him for the most part.  The majority of the Golden Wave offense came via short slant passes from quarterback Derrick Endicott.

After testing the waters in the first quarter, the Wolfpack were finally able to break through.  The drive started at the Wolfpack 48 after a long punt return by Gabe Counts.  The workhorse on the drive was Trenton Adkins, who easily gained six-seven yards a carry on the drive.  The drive was capped off by McKenzie Sproles who jaunted in on the keeper from two yards out.  With 1:50 left in the first quarter, the Wolfpack broke through for an early 7-0 lead.

With the Golden Wave forced to punt on their next series, the Wolfpack went to work.  Starting from their own 32-yard line, the Pack once again relied on the legs of Adkins.  Adkins was rewarded with a trip to the pay window on the drive, cashing in on a seven yard run.  With the extra point, the Wolfpack were firmly in control 14-0 with 9:10 left in the half.

Once again, the Pack forced Grundy to punt.  Tyler O’Quinn took over at quarterback for the Pack and quickly went to the air, firing a nice slant to Quinn Turner for a 23-yard gain.  Moments later, O’Quinn again went to the skies finding Matthew Sexton for a 28-yard completion over the middle.  Sexton galloped all the way to pay dirt and the Pack were on the prowl.  With 4:22 remaining in the half, it was all Ridgeview at 21-0. 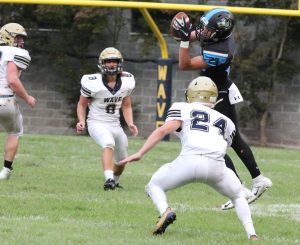 On the ensuing kickoff, the Pack, who had shown no fear of kicking to Gabe Fiser, finally paid the price.  Fiser was able to sprint away from the Pack defense before finally being run down at the Wolfpack four yard line.  On the next play, Derrick Endicott scampered in to the end zone on the keeper and the Golden Wave were on the board.  The extra point was blocked by the Wolfpack special teams unit, making the score 21-6 with 4:04 left in the half.

On the next drive, it didn’t take long for the Pack to strike again.  After a couple of sizable gains from Adkins, it was Sexton time again.  The Eastside-transfer raced to end zone from 32 yards away.  After the extra point, the Wolfpack extended their lead to three scores at 28-6 with 2:33 to go in the first half.

After a quick three-and-out by the Golden Wave offense, the Pack got the ball back with 1:33 to go in the half.  It only took 16 seconds for the Pack to blow the game wide open.  A 57-yard bomb from O’Quinn to Sexton gave the senior tailback his third touchdown of the night and the Pack were well on their way to victory at 35-6.

Out of the locker room for the second half, the Pack received the football.  Using up some clock and churning out the yards, the Pack struck again with Adkins scoring for the second time on the night from 21 yards out.  The Pack led 41-6 at the 9:48 mark of the third quarter and the mercy rule was in effect with the 35 point cushion for the Wolfpack.

On the ensuing drive for the Golden Wave, Fiser was finally able to showcase his abilities and made the biggest play of the night for Grundy.  The senior playmaker broke several tackles and sprinted away for a 53-yard touchdown to briefly silence the Wolfpack faithful.  The two point conversion pass attempt was incomplete and the Wolfpack led 41-12 midway through the third quarter.

After a couple of quick possessions by both teams, the Pack put an emphatic exclamation mark on the contest. Sexton took off for his fourth touchdown of the night to a loud standing ovation from Wolfpack Nation.  The extra point was no good and the scoring for the contest was closed out at the 4:08 mark of the third quarter.

As the clock struck zero, the Pack left Nelson Memorial with an emphatic 47-12 victory over the Golden Wave.  On the night, O’Quinn was a perfect 5-5 for 124 yards and two TD’s.  Matthew Sexton was on the receiving end of both scores and finished with two catches for 85 yards and the two TDs.  On the ground, Trenton Adkins led the way with 143 yards on 18 carries and two TDs.  Sexton also complimented the ground game, breaking the century mark with 112 yards on seven carries and two TDs.  McKenzie Sproles finished with 34 yards on five carries with a score.

Grundy will travel to Bradshaw, West Virginia next Friday to take on River View in an interstate affair.  The Wolfpack will also have an interstate clash as they host Shelby Valley of Kentucky next Friday night.  As the week progresses, the question for the Wolfpack will be who gets the nod at quarterback for Friday night’s contest with Shelby Valley?  Will it be O’Quinn or Sproles?

4 thoughts on “Wolfpack swim past Wave with ease”