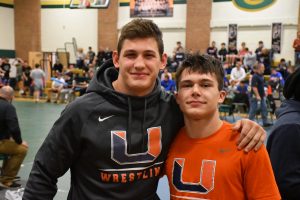 Cousins Mason Polier and Johnny Satterfield wrapped up a stellar season on the wrestling mat for Union High School. Each brought home a third place finish in the VHSL class 2A state wrestling tournament this past February, Polier in the 220 pound class and Satterfield in the 160 pound class. Polier is wrapping up an outstanding career that includes a state championship while Satterfield is only beginning and has high hopes for himself. 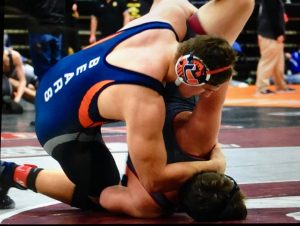 Polier, who won a state title the year prior in the 195 pound class, moved up to the 220 pound class and saw similar success to years prior. Mason went on to win the region in his weight class over Trent Ray from Lebanon. As the state tournament began, Polier opened by defeating Dakota Gilliam from James River. After the triumph over Gilliam, Polier advanced to face the reigning state champion, Neil Clayton Jr from Bluestone. After each grappler fought their hearts out, Clayton Jr advanced to the state championship where he was dethroned by Seth Fitzgerald of Buffalo Gap. After his loss to Clayton, Polier went on to defeat Evan Graham of Poquoson to set up a third place showdown with Trent Ray of Lebanon. Just like the regional championship match, Polier defeated Ray to claim his third place finish in the state tournament and finish off the year with a record of 54-7.

“I had a really great wrestling career, I wish I could have won another title this year but that’s a part of the sport.” Said Polier. “Moving up a weight class this season was a little challenging, especially at state. I had one of my best seasons in my career and finished off strong. I’ll miss it but I’m excited to be moving on and definitely looking forward to college.”

Polier signed back in the winter to continue his football career at the University of Virginia’s College at Wise. 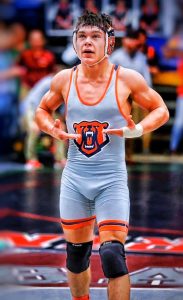 In regional play, Satterfield advanced after a first round triumph over Levi Thomas from Lebanon. Satterfield would be defeated in the second round by Richlands’ Jacob Puckett, who would go on to defeat Stevie Thomas from Virginia High to claim the regional championship in the 160 pound class and would also lay claim to the state championship weeks later. However, Satterfield would bounce back after the loss. He went on to defeat Muhammad Muzaffer of Graham and then defeated Nick Napier of Lee High to claim a third place finish in the regionals. In the state tournament, Satterfield had to take a similar route as he opened with a win over Caleb Shipwash from James River. In the second round, Satterfield would suffer defeat at the hands of eventual state runner up, Colt Oliver from Amelia County. Facing an uphill battle, Satterfield reeled off three consecutive victories to reach the third place match. He began his tear with consecutive wins over Clayton Wagoner from Stuarts Draft and Grayson Park from Staunton. He then went on to defeat Toby Bryant from Appomattox to set up a third place showdown with Joseph Teasley from Nandua. Satterfield would persevere over Teasley after an intense match and claim a third place finish in the state tournament and finish his freshman season with a record of 35-21 in his first season wrestling at the varsity level.

“This was a big transition to make for me, coming out of middle school wrestling and a few AAU tournaments, I knew I had to make adjustments quick.” Stated Satterfield. “Luckily our coaching staff is really strong and they’re willing to help us and push us every single day. We have a great community behind us from parents, classmates and teammates from other sports. It was a great way to start my high school career but not how I want to finish, I definitely have big plans ahead.”

From the football field to the wrestling mat, the cousins have shared a special bond with each other and you will always find one cheering for the other, pushing each other to be better. Both have athletic genes as their respective fathers each played football at the collegiate level.

“I’m super proud of Johnny.” Noted Mason. “He puts in the time and the effort in everything he does. It really showed this year on the mat and on the football field. Being teammates with him this year in football and wrestling was awesome and an amazing experience. I can’t wait to see what the future holds for him on the football field and on the mat, he’s got a bright future for sure.”

“The bond we share in nearly irreplaceable.” Said Johnny. “He’s taught me so much, he’s such a great leader in every sport. As state got closer, I found myself wrestling him to prep. I mean, I’m a 15 year old 160 pound freshman and he’s an 18 year old 220 pound brute.” Said a smiling Satterfield. “We nearly beat each other to death in the process but he was the best partner for me at the time. Having him there at state with me changed my whole mindset, we were there for each other when each of us lost. We will continue to support each other in every single thing we do for the rest of our lives. The chemistry was and will continue to be like nothing else.”

Polier for sure left his mark at Union High School not only on the field and on the mat but in the classroom, in the hallways and in the community. His leadership skills have been noted as second to none. As Mason will now be moving on to continue his football and academic career at UVA Wise, Johnny is looking forward to carrying on the family tradition in the Union Bear Blue and Orange.