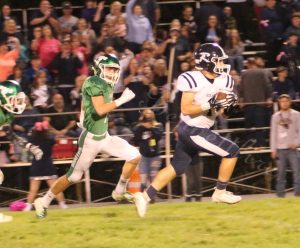 The Blues (6-4, 4-1) used a prolific offensive attack that accounted for 539 yards of offense to run past the Bearcats (1-9, 1-4). While the Bearcats’ season ends, Richlands blows into the playoffs as the 5 seed in the Class 2D bracket.

Playing on senior night, quarterback Cade Simmons went 6-10 for 138 yards with three total touchdowns on the night. Richlands was able to rack up in the running game, rushing for 401 yards on just 41 carries for 9.8 yards per carry.

Sophomore WR Sage Webb was Mr. Everything, rushing for 183 yards on 14 carries for 3 touchdowns. He also caught 4 passes for 59 yards and two touchdowns.

The long bright spot for Virginia High came on the legs and arm of Stevie Thomas. He finished his evening 5-8 for 148 yards with one touchdown and one interception. Thomas also ran for 79 yards and a touchdown.

Richlands now turns its sights to the second season.

The Blues will travel west to take on the Central Warriors in Wise. These two teams have met twice before, with Richlands owning a 2-0 record.

Central is led by junior running back C.J. Crabtree. He ran for 165 yards against Grundy, breaking the record for career rushing yards with 2,980.

Both offenses have proven the ability to run the football this season. The key matchup could come down to the Central secondary against Richlands’ ability to pass the football.