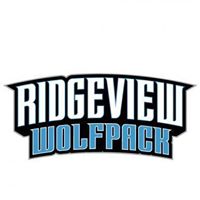 It was a happy Homecoming 2019 on the Ridge Friday night for the homestanding Ridgeview Wolfpack.  Ridgeview dominated on both sides of the game Friday night with a 55-6 drubbing of the Lee High Generals.

Trenton Adkins came into the contest as the player to watch and early on it appeared that Adkins would continue his dominance against hapless defenses.  Adkins first carry went for 80 yards and a touchdown at the 7:39 mark of the first quarter.  Adkins would carry the pigskin one more time on the next Ridgeview possession but would experience cramping and sit out the majority of the remainder of the half.  With Adkins sidelined, the Wolfpack used the opportunity to do damage through the air.  Timmy Hess caught a 28 yard touchdown pass from Nick Phillips with 3:40 left in the first quarter.  The Wolfpack added one more score in the opening quarter on the legs of capable backup running back Kanin Lewis.  Lewis scored from 12 yards out making the score 20-0 in favor of the Wolfpack at the end of one quarter.

The Generals saw their only success of the evening on the ensuing possession.  Eating up plenty of time on the ground, the Generals finally found paydirt with 7:40 left in the half on a one yard plunge by Jonathan Blanken on fourth and goal.  The Wolfpack answered on the ensuing possession as Phillips found freshman Brandon Beavers for a 31 yard.  Phillips was five of seven for 106 yards and three touchdowns through the air.  Adkins returned to the contest and added a 13 yard touchdown with 3:43 left in the first half to send the Wolfpack into the locker room with a 34-6 lead.

Quarterback Phillips found Beavers again on the first Wolfpack possession of the third quarter.  Beaveres hauled in the 17 yard touchdown pass to make the score 41-6 with 9:49 left in the third.  Beavers finished the night with four receptions for 78 yards and the two scores.  The freshman was ecstatic about his breakthrough night.  “I came into the season just hoping to play,” said a jubilant Beavers.  “As the season has come along, I have received more and more playing time and coach has trusted me to go up and get the deep balls.”

Coach Rick Mullins of the Wolfpack was also very complimentary of the young up and comers on his squad.  “It takes a little while to get the trust in them, but week by week we gain a little more trust in them and they’re showing they can make plays and they’re getting better every week.”

Adkins added his third touchdown of the evening from 11 yards out with 5:13 left in the third quarter.  Adkins finished with 238 yards on 13 carries with three touchdowns.  At the end of three, the Wolfpack were well in command 48-6.

With the contest well in hand, freshman Cannon Hill entered the contest at quarterback and scored his first career touchdown from five yards out to provide the final margin of 55-6.  In defeat, Jonathan Blanken had a great night statistically compiling 101 yards on 13 carries with one touchdown as well as one reception for ten yards.

The Wolfpack (5-0, 3-0 Mountain 7) are open this week before returning to action a week from Friday in a showdown with the Union Bears in Big Stone Gap’s venerable Bullitt Park.  Lee High (0-4, 0-2 Mountain 7) returns home to Five Star Stadium on Friday night to host the Perry County Central Commodores (0-6) from Kentucky.