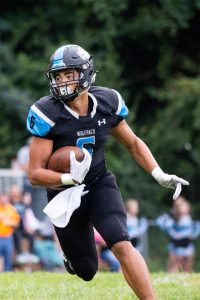 Lawson-Fitchko Stadium in downtown Norton was the site of Southwest Virginia’s opening football contest of 2019.  The venerable stadium was also the host of one of Southwest Virginia’s finest single performances in recent memory.  Trenton Adkins of the Ridgeview Wolfpack rushed for 357 yards and 5 TD’s on the night in a 40-13 convincing victory over the John I. Burton Raiders.

It did not take long for the fireworks to begin for Adkins on the night.  After receiving the opening kickoff, the Raiders’ Mikey Culbertson fumbled on the second play from scrimmage.  It took the Wolfpack only two plays of their own for Adkins to scamper 39 yards to paydirt.  Barely a minute into the contest and the Wolfpack held a 7-0 advantage.

The fireworks would continue on the ensuing kickoff as Esau Teasley of the Raiders would race 83 yards to the endzone.  After the PAT, the Raiders and Wolfpack were deadlocked.

The Wolfpack faced adversity on their next possession after being stopped on defense.  The Wolfpack punted the ball only to have it blocked by the Raider special teams.  The Raiders had exceptional field position at the Wolfpack 12 yard line.  Teasley scored his second touchdown of the night from four yards out. Two plays later and the Raiders had a 13-7 advantage.Neither team was able to score again for the remainder of the opening stanza.

Adkins’ number was called again early in the second quarter as he was able to find the promised land from five yards out.  After a missed extra point, the Raiders and Wolfpack were deadlocked once again at 13.  The Raiders turned the ball over on downs, deep in Wolfpack territory on the next possession.  On the very next play, Adkins raced to the house from 87 yards away and the Wolfpack regained the lead at 19-13 after a blocked PAT.  Adkins would score once more in the opening half of play, scoring his fourth touchdown of the night from 10 yards away.  The Wolfpack were well in command at the break, leading the Raiders 26-13.

The Wolfpack and Adkins took over right where they left off in the third quarter.  28 seconds is all it took for Adkins to score his fifth of the night from three yards out after gaining 59 yards on the previous play.  Later in the third quarter, the Wolfpack displayed some aerial prowess.  Quarterback Nick Phillips hooked up with Timmy Hess for a 40 yard bomb at the 2:07 mark of the third to close out the scoring at 40-13.

Despite the lopsided win, Wolfpack coach Rick Mullins felt there was room for improvement.  “Way too many mistakes,” said Mullins.  “This is not where we need to be by any stretch of the imagination.  We have some work to do.  We came out and played better in the second half.  But we have some work to do.”  Mullins was also quick to praise the homestanding Radiers.  “Burton has a really great football team.  They’re going to get a lot of wins this year.”

Both teams are back in action on Friday night.  The Wolfpack host their home opener on “The Ridge” against interstate rival Shelby Valley, Kentucky.  The Burton Raiders will host Chilhowie in an early season matchup that could determine playoff seeding in Class 1, Region D.