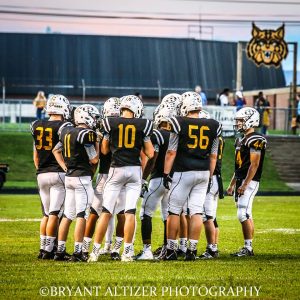 Radford looks to continue their Cinderella story as the top-seeded Bobcats get to host their second playoff game this week against the Gretna Hawks in a rematch from week four. Radford (10-1) is on a nine-game winning streak since falling to Galax in week two. Since that game, the Bobcats have dominated most of their opponents, only allowing seven points per game while scoring nearly 30 points per game. Radford blanked Fort Chiswell 22-0 last Thursday for their first playoff win since 2015.

Gretna (9-2) fell to the Bobcats 7-6 early in the season. There only other loss came to the three-time defending 2A champions, Appomattox. Gretna throttled James River 35-2 last week, for their first playoff win since 2011. While Radford’s defense is tough, Gretna proves to have an even stronger defense. The Hawks forced five shutouts on the season. Appomattox was the only team to score more than seven points on the Hawks. Through 11 games, Gretna gave up 53 points, which ranks among the top of the 2A division. They have a powerful offense to go along with their defense which scored 60+ points four times this season.

P.J Prioleau lead the Bobcats to a first round victory over the Pioneers as he scored all three touchdowns for Radford. He finished that game with 149 yards on 21 carries. Prioleau rushed for 1,179 yards and 13 touchdowns in the regular season. Alongside Prioleau is Zane Rupe who can throw it or run it which he primarily does on option plays. He was 81-of-134 through the air for 909 yards and nine touchdowns in the regular season. He also has six rushing touchdowns and 229 yards on the ground. His go-to receiver is Trace Shepherd, who has 34 catches for 392 yards and seven touchdowns on the season.

Last week the Hawks ran all over the Knight’s defense, picking up 329 of their 380 yards of total offense on the ground. Gretna averaged 9.1 yards per carry. The Hawks has a stable of backs that got to carry the ball. Quarterback Tabron Mabins lead the Hawks in rushing, picking up yardage in chunks. He finished with 105 yards on 12 carries, including a 46-yard touchdown run. Running back Daelyn Miller finished with 83 yards on just five carries. Jaylan Myers, Damien Canada and Jorden Berger joined Miller in the backfield, all finishing with at least 40 rushing yards.

The winner of this game will face either Appomattox or Glenvar in the Region 2C Championship.