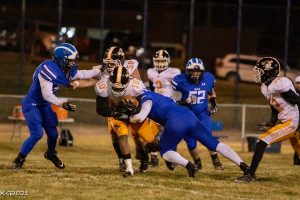 It was only week three but the stakes were high coming in to Friday nights showdown at B.C. White Stadium in Castlewood. The Raiders from J.I. Burton rolled in to Russell County looking to earn their first victory of the season while Castlewood was looking to improve to 2-0 and earn an ever so important victory in the race for the Cumberland title. Both teams had a bye in week two and were coming off of complete opposite performances in week 1. Burton struggled at Chilhowie in a 9-0 defeat while Castlewood done anything and everything in a 38-0 beatdown of Honaker.

The large margin of victory in week 1 had folks believing this was the year that Castlewood could get the job done against the Raiders. You would have to go back to September 10th, 1971, that’s fifty years, since the last Castlewood victory over J.I. Burton. Before kickoff, both sides were well aware of the feat that Castlewood was looking to accomplish.

After a scoreless first quarter, the game featured three touchdowns in the final three minutes of the first half. Raider quarterback opened scoring with a 7 yard touchdown pass to receiver Elijah Lovell with 2:48 showing on the clock before half. The two point conversion was no good and Burton held a 6-0 lead. After forcing Castlewood to punt on the ensuing possession, Esau Teasley fumbled the punt return and Landen Taylor scooped the ball up and raced 30 yards for a Castlewood touchdown. The PAT was no good and the score would be tied 6-6 with under a minute before the half. Teasley would soon shake off the fumble as he raced 63 yards for a touchdown just seconds later to give Burton a 12-6 halftime lead that would not be relinquished. 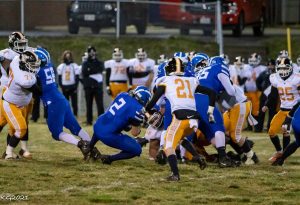 Castlewood would inch closer however, late in the third. Facing a second and goal from the Raider 4 yard line, Castlewood was hit with an improper equipment penalty that would push them back five yards and seemingly have to settle for a 28 yard Adam Gibson field goal to make the score 12-9 with 4:10 left in the quarter. Much like late in the first half, it wouldn’t take long for Burton to recover as Teasley sprung loose for a 47 yard touchdown run that would push the Raider lead to 18-9 with 2:27 remaining in the third quarter. Castlewood would struggle putting anything together on offense as Burton kept their foot on the pedal. Touchdown runs from Trevor Culbertson and Cam Kennedy in the fourth gave the Raiders a commanding 32-9 lead with 3:21 remaining in the contest. Castlewood would throw one more punch as Jeremiah Allen scored on a 61 yard touchdown run with a little over two minutes remaining. Burton would regain possession and bleed out the clock and take a 32-17 victory back to Norton. 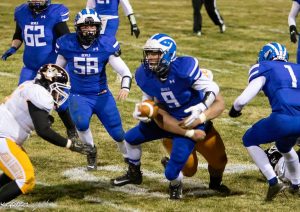 Burton defense held Castlewood to only 123 yards rushing as 61 of those came on the Allen touchdown run while the Raiders racked up an impressive 294 rushing yards. Both squads ran 48 plays on the evening as Castlewood only averaged 2.7 yards per play and Burton used the big play to propel them to victory as they averaged 7.4 yards per play. Burton added 63 yards through the air to put them at 357 yards of total offense. Castlewood missed some opportunities through the air and finished with 8 yards passing for a total of 131 yards of offense. 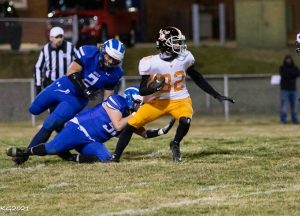 Teasley led the offensive attack for Burton with 10 carries for 168 yards and 2 touchdowns. Trevor Culbertson was vital in the run game as he churned out 86 yards and 1 touchdown on 9 carries. Cam Kennedy added a hard nosed 27 yards on 5 carries with a touchdown. Jaymen Buchanan was 5-17 through the air with a touchdown. Castlewood got 101 yards and a touchdown on the ground from Jeremiah Allen on 11 carries while Ben Neece powered his way for 43 yards on 8 carries.