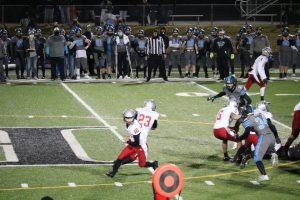 It wasn’t foggy this go around but it sure was a cold one in the mountains of Dickenson County as Mountain 7 rivals Wise Central and Ridgeview opened their respective seasons. Ridgeview was left with a sour taste in their mouth as the Warriors sent the Wolfpack home in last seasons Region 2D semifinals with a 14-7 victory.

Unfortunately, for Coach Todd Tiller and his Pack, it would be the same outcome as that foggy night in late November, a 14-7 loss. Central used big plays on special teams and a rugged defensive effort to stymie Trenton Adkins and the Wolfpack. Ridgeview only produced 90 rushing yards on the night while two big special teams plays led to two short touchdown runs from the Warriors Noah Bolling to produce the scoring for Central. 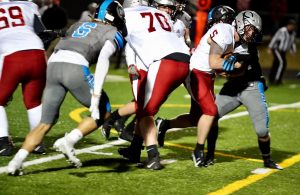 “I’ve been looking forward to this season since I was a freshman.” Said Bolling, who will be playing his college football at Bluefield this fall. “Many people, including myself think this could be our year. We walked in to this stadium confident and I never had a doubt that we’d leave 1-0. We’ve got a bunch of athletes with heart and desire to win, we knew we were shooting ourselves in the foot at halftime and we made the mental adjustments we needed to win the game.”

Despite the setback, Coach Tiller saw a glimmer of light in the loss. “I felt defensively that we played very well. We saw a lot of positives out there, we’ve just got to get everything cleaned up and get back to work.”

The stout Warrior defense set the tone as they held Toledo bound running back Trenton Adkins and the Wolfpack rushing attack to 90 yards on the ground. 80 of which belonged to Adkins. Central also added an interception off of quarterback Nick Phillips who tossed for 59 yards and a touchdown to Brandon Beavers to open scoring. Ridgeview held a 7-0 lead at the half before Central used a pair of third quarter touchdowns to take the lead. After a blocked punt that went out of bounds inside the Wolfpack 5 yard line, Bolling plowed through from two yards out for his first score of the night to knot the game at 7 all. Shortly after, Ethan Mullins returned a punt 70 yards for Central down to the Ridgeview 1 yard line. That set up Bolling’s second touchdown of the night and would be all they would need to leave Rose Ridge victorious. 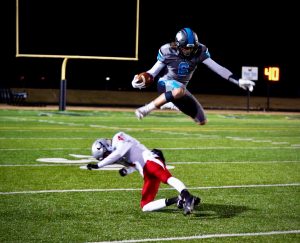 Adkins would finish the night with 80 yards on 16 carries while C.J. Crabtree would lead Central in rushing with 57 yards. Bolling would add 46 yards on the ground to go along with his two scores.

“We knew it would be a physical game and they would key on Trenton.” Added Tiller. “We thought we could hit on a few passes but just weren’t able to connect on them and unfortunately two miscues on punt team that set up their two touchdowns in the third were huge factors for them as well.”

So how does a team stay grounded after beating one of the top teams in the region with arguably the best player? According to Bolling, the slim margin of victory helps with that.

“We feel like this game grounded us a little bit. We came in there wanting to leave no doubt who the best team in the district was but we feel like we left that doubt and didn’t play up to our standards. We know what we’re capable of and our goal is simply to reach it.”

Central is back in action this Saturday as they host John Battle, who is coming off a 16-6 victory over Gate City. Ridgeview hits the road to Ben Hur to take on the Lee High Generals who were blanked 28-0 by Union in their first game.