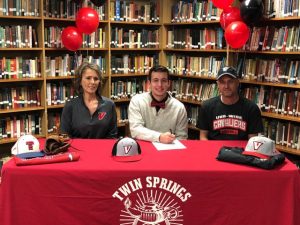 Twin Springs High School baseball standout Justin Reed has signed on the dotted line to continue both his academic and baseball careers at the University of Virginia’s College at Wise. Reed will begin his journey in the Fall of 2020 and dig his cleats in to the new dirt at Burchell Stallard Field for long time Wise skipper Hank Banner. Banner, a resident of Castlewood, is entering his 24th season at the helm of the club and is excited to welcome in Reed, who lives about 20 minutes down the road from his future coach.

“When you talk about Justin Reed the first things that come to mind are his work ethic and how much the kid loves the game of baseball.” Noted Banner. “Justin has the ability to come in and be a really good player for us. He’s got a great family who have been really supportive of him and they’re just all around good people. We’re going to get him in here, get him in the weight room and the on field stuff will take care of itself. He’s got great position flex and will probably play outfield early in his career and can end up playing in the infield later in his career and using him on the mound is likely, too. We love his bat, he’s got some pop and he’ll develop more as he gets older and stronger. We’re excited for him to get in here and get to work.”

Getting to play under somebody who lives right down the road from him also seemed to pay dividends on Justins decision. “Coach Banner is from the same area I’m from so he understands where I come from and the culture that is in the area, so that’s super cool to have someone coach me at the next level that lives so close to where I have grown up. He’s in Castlewood so he’s able to come to my basketball games when we play there and he always takes the time to talk to me after our games.” Noted Reed.

Playing at Wise, close to where he grew up is special to Justin as he noted the campus visit really made him feel at home. “Everything just made me feel at home. The Wise coaching staff showing the interest in me, the campus itself was really nice and I’ve spent a lot of time in the town of Wise working with Chad Longworth. So the town feels pretty natural to me and then like I said the staff made me feel very welcome up there on campus.”

I think the school really fits well with what he’s wanting to do academically.” Said Justin’s mom, Stephanie. “When we came up here and took a tour of the campus, it was really amazing to see all the advancements that they had made up there on the campus. The facilities are great.”

Coming from a small school that hovers around 200 students, Reed will be enrolling at Wise where the enrollment stays around 2,000.

“I think Wise is a perfect fit.” Said father, Gerald. “Coming from a small high school and then going to a college that has over 20,000 kids would have been a culture shock for him.”

Reed has spent his entire baseball career under the tutelage of his dad, Gerald. Gerald has coached Justin since he was a 4 year old t-baller and is on the staff at Twin Springs, which is managed by Twin Springs and UVA Wise graduate, Jared Finch. Finch, a 6’6 right handed pitcher played under Banner at Wise and was a big contributor in the recruiting process for both parties. Finch, a 2012 graduate of Twin Springs and a 2016 graduate of UVA Wise, went with Reed on his visit to Wise and said that Justin seemed to click with the staff and players right away.

“He really liked the campus and he was impressed with their facilities.” Said Finch. “Justin’s ability to play anywhere on the field is what makes him so special, he’s a dual guy. You couldn’t ask for a better person on and off the field. He’s the true definition of a student athlete. He’s just as good with the books as he is with the bat. Classroom and field, he does it all.”

Justin has been a starter for the varsity since he was a Freshman and has pitched in some big situations for Finch and company. Through his first three years, Reed has compiled a 20-7 record on the mound with 270 strikeouts and an impressive ERA of 1.10. 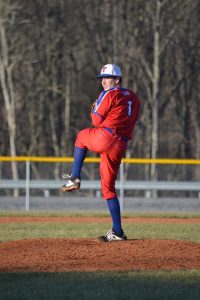 “Justin has been a leader for this baseball program since the day he stepped on the field here as a Freshman. He goes about everything the right way and and is a prime example that hard work pays off. He’s put the time in to the game, there is no offseason for the kid. He’s been blessed with great success.” Added Finch.

Reed is coming off of an impressive Junior campaign where he compiled a 9-2 record on the mound with 125 strikeouts. Reed isn’t too shabby with the lumber either. Last Spring he drove in 25 runs while hitting 3 home runs and scored 35 runs. Reed was also walked 27 times as most of those were intentional. Reed finished the year with first team all Cumberland honors and surfaced on the all Region second team. Through three years, Reed has piled up over 70 hits, hit 8 home runs, drove in 65 runs and scored 80 runs for the Titans. He also excels on the court for Twin Springs under head coach Tyler Webb. Reed is a combo guard who has netted a career high of 34 points.

“My family has been the rock of the entire process.” Stated Reed. “They support me in everything I decide to do. In the Summer while playing travel I always had a nice support group that would come and watch me play and that was such a great feeling. Baseball is one of those games that can be rough on you mentally and I’ve always had family to turn to when things got hard, they’ve been amazing.” 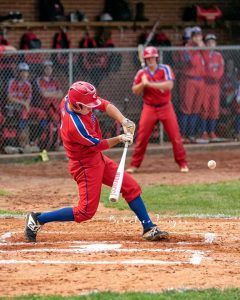 The Reeds have logged a lot of baseball miles. Whether it’s been a trip to Thomas Walker or up and down the East Coast playing on a variety of college and high schools fields for Summer ball, they’ve seen it all and it will be something that they miss.

“It’s bittersweet.” Noted mom, Stephanie. “It’s been a heck of a ride, I’m glad it’s not over yet. I love to watch Justin and Gerald interact with each other on the field. It’s not been all about the ball playing. The trips are a lot of fun and Gerald has been more than a great coach. He’s been a great dad and obviously has taught Justin a lot about baseball because he’s pretty baseball smart himself.”

The knowledge passed on from father to son is evident. “I knew about the age of 13 or 14 that he was going to be able to play at the next level.” Said Gerald. “He was just as good as some of the players he played summer ball against and those players were some of the best players on the East Coast. I’m going to miss it. I’ve got one more Spring of high school ball with him but it’s been great, we’ve spent a lot of time together on the diamond and all the Saturday workouts and traveling have all been worth it.” 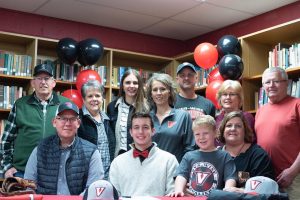 Justin is looking forward to finishing out his stellar career at Twin Springs this Spring and had high praise for his current head coach. “Coach Finch has been tremendous and he’s shown me how to play the game the right way.” Said Reed. “He’s helped develop me for the next level and he’s always had the confidence in me to take on some big situations. He came along with me on my visit to Wise, and I know he’s excited for me to play at his alma mater. I’m excited to give my all for him and enjoy one last ride under him this Spring.”

When asked about who his favorite player was growing up or somebody he would maybe try to mold his game after, Justin noted that Albert Pujols would have to be his favorite player as both him and his dad are St. Louis Cardinals fans. Justin stated that a player he would try to mold his game after would be Max Scherzer, who will go down as one of the greatest pitchers of all time as he’s accumulated three Cy Young Awards in 2013, 2016 and 2017.

In addition to playing high school ball, Justin has spent his Summers playing travel ball with the Evoshield Canes who are based out of Fredericksburg, Virginia. Reed caught the attention of many schools as he had several colleges interested in him. Three schools that showed the most interest in Justin were Centre College, Milligan College and Radford University.

You can catch Justin and his teammates at Keith Memorial Park in Nickelsville this Spring on their journey to chase down a Cumberland District crown. All photo credit goes to Wendy Blodgett and Stephanie Reed.