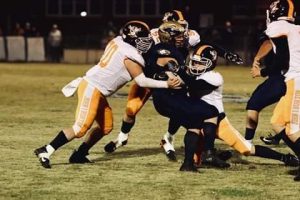 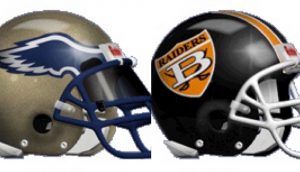 J.I. Burton wasted no time in putting away Rye Cove Friday night. A 27 point outburst in the first quarter led to a 39-0 lead at halftime for the Raiders who eventually came away with the 39-6 victory on the road over the Eagles.

Burton piled up 336 yards of offense in the victory. 333 of those yards came via rush as Esau Teasley led the way for the Raiders as he scored on runs of 46 and 55 yards in the opening ten minutes of the game to finish his night with 101 yards on the ground. Najee Steele also scored 2 touchdowns in the first quarter on runs of 1 and 35 yards. Steele finished the night with 4 carries for 79 yards to go along with the two scores. Fullback Mikey Culberton tallied 100 yards rushing on only 6 carries for the Raiders. Tyrell Ingram returned an interception for a touchdown and Tyler Spriggs scored on a 2 yard touchdown run for Burton who only ran 28 plays in the game to Rye Coves 50. Rye Cove finished with 134 total yards on the evening with all of those coming on the ground. Mason Hardin was 0-2 through the air with 2 interceptions. Hardin carried the ball 24 times for 89 yards for the Eagles while Jonathan Howell rushed for 40 yards on 6 carries and scored a four yard touchdown run in the fourth quarter for The Cove. Rye Cove possessed the ball for 36 minutes in the game while Burton held the ball for 12 minutes. 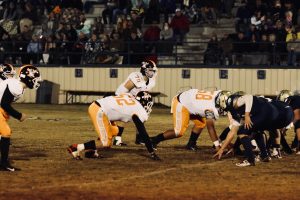