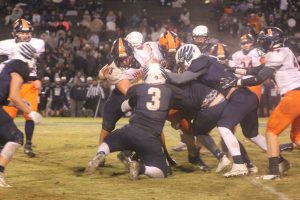 When Union and Abingdon met at Falcon Stadium Friday night, each team had a bad taste in their mouths as they were both coming off of losses that they soon wanted to forget. Union was upset by Central and Abingdon took a 41-0 shellacking at the hands of Ridgeview. However, at least a share of the Mountain 7 crown was still in reach for the winner of the contest. Behind another superb effort from Senior Mason Polier, the Union Bears laid claim as the victor in a 28-21 double overtime thriller on a frost covered field in Abingdon.

“I thought it was just a great high school football game.” Said Union head coach Travis Turner. “Any time you can go on the road and win a district game, it’s tough. Our kids were excited to be playing, we had to get that bad taste out of our mouth from about two weeks ago.” 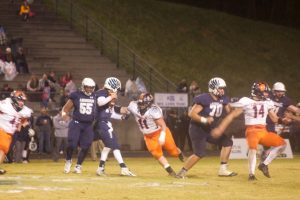 Union was looking to set it in cruise control early as they jumped out to a 14-0 lead. On the second play from scrimmage, Polier tipped a Jaden Boothe pass to himself for the interception and returned it 42 yards to the Falcon 3 yard line. One play later Polier powered in to the end zone for the 7-0 lead less than a minute in to the game. After Antwun Jenkins swatted away a Abingdon pass on fourth down, the Bears went on an eight play, 64 yard drive that would be capped off by a 2 yard touchdown plunge from Polier to make the score 14-0 early in to the second quarter. After forcing Abingdon to punt, Union got the ball back at their own 18 yard line with 5:10 remaining in the half looking to blow the game open. The Bears completed a 10 yard screen pass to Polier on third and 8 to pick up a first down and then received first down runs from Polier and Bryce Guerrant before the drive stalled with 1:32 remaining in the half. A shanked punt resulted in great field position for Abingdon at their own 48. Boothe completed passes to Peyton McClanahan and River Carter to put the Falcons inside the 10 yard line with 36 seconds showing on the clock. A Boothe run down to the 1 yard line then set up his quarterback sneak for a touchdown to cut the lead to 14-7 with 5 seconds remaining before halftime. 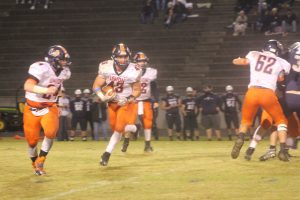 Neither team could muster anything in the third quarter and it wasn’t until with 5:18 remaining in the fourth quarter before a big play was made. Facing a third and 12 from midfield, River Carter stepped in front of a Brody Gibson pass on the Abingdon sidelines to give Abingdon life and the ball at their own 38 yard line. On the next play, Malique Hounshell carried the ball 44 yards down to the Union 5 and two plays later Jake Johnson punched the ball in to the end zone to tie the game with 3:32 remaining in the ball game. After the kick return, Union would set up shot at their own 31 yard line. Runs from Guerrant and Polier would set up a third and 5 pass that would be tipped by an Abingdon defensive lineman but Antwun Jenkins was able to fight for the ball as it fell out of the air but would be a yard short of the first down marker. Instead of gambling and going for it at his own 40 yard line, Turner elected to punt the ball away and allow his defense to make a stop. After another short punt, Abingdon moved the ball down to the 15 yard line to set up a 32 yard field goal with two seconds remaining in the game. The kick hooked left and never had a chance to send the game in to overtime tied at 14. 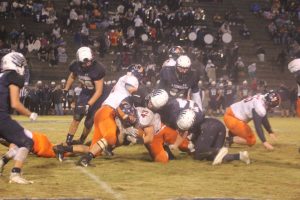 Polier fights for yardage late in the second half against Abingdon

Abingdon took the ball first in overtime and would be aided by two unsportsmanlike penalties on the Bears that put the ball at the 2 yard line. Jake Johnson would score on the next play to give Abingdon a 21-14 lead. After Polier was brought down behind the line of scrimmage on Unions first play, a timeout was called by Turner and the Bears. Coming out of the timeout, receiver Daemi Lester took the handoff only to pass it to a wide open Malachi Jenkins in the corner of the end zone to tie the game at 21 all and force a second overtime. Union would possess the ball first in the second overtime. It would only take two plays for them to punch the ball in for a score. A 8 yard run from Guerrant down to the 2 yard line set up Poliers third touchdown run of the night and give Union a 28-21 lead. Abingdon then would take possession and Hounshell would be stopped for no gain on the first play and Antwun Jenkins knocked away a pass from River Carter to force third and goal. A skipped pass from Boothe to Carter would result in a fourth and goal for the Falcons from the 10 yard line. Immediate penetration on the pocket from the defensive line forced Boothe to step up inside the pocket where linebackers C.J. Jones and Ethan Hall would bring Boothe down to seal the game for the Bears.

“Daemi did a great job on the pass, finding the receiver open and Malachi did a good job of running a good route.” Said Turner when asked of the trick play in the first overtime. “We got some things we need to clean up, mistakes we need to get fixed so we’re going to go back and look at the film and get some things corrected.” Added Turner.

Mason Polier once again led the charge for the Bears with 33 carries for 227 and 3 touchdowns. Bryce Guerrant carried the ball 12 times for a hard earned 47 yards.

“It was a battle all game long. Hats off to them, they’re a tough football team.” Said Polier. “Bryce had some tough runs tonight for us and that helps us a lot. Every yard and every carry he can give us helps our offense tremendously.”

“We want to win the conference. Thats been our goal.” Added Polier. “John Battle is going to come in here and play hard and we’re going to get 110 percent from them every play so we have to prepare hard this week in practice and get ready for a fight from those guys.”