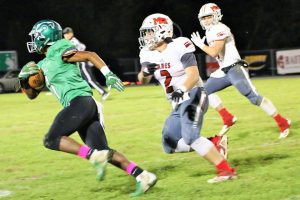 The Tazewell Bulldogs are coming off a 35-7 loss at the hands of the Bluefield Beavers. J’me Harris’ squad is touting a 4-3 record, with wins coming against Virginia High, Mount View, Princeton & Honaker.

Against the high octane Beavers the Bulldogs were shorthanded due to multiple nagging injuries. With starting quarterback Gavin Nunley nursing a lower body injury, sophomore Jared Mullins stepped up to the plate as the starting signal-caller for the ‘Dogs. Mullins was an effecient 7-9 passing, and chipped in over 50 yards on the ground against the Beavers in his first varsity start. Junior wide receiver Josiah Jordan was Mullins’ favorite target, and freshman running back Braxton Dowdy provided a much needed boost in the backfield. Dowdy accounted for the Bulldogs only score of the night.

Tazewell is anticipating to have some of their injured players back for the “Dragon Bowl.” If he can go, Gavin Nunley, who has accounted for over 700 rushing yards on the season, will be a asset for the ‘Dogs to have on the field.

Tazewell’s defense will be led by their senior linebacking duo of Cameron Taylor & Cade Myers. Jayden Taylor & Jacob Witt will be tasked will containing the Marion outside rushing attack, while Mullins and Shuyler Lawson will be counted upon in the Bulldogs’ defensive backfield.

Sure-footed Tanner Wimmer will handle the kicking duties, while Taylor will look to flip the field position in Tazewell’s favor in the punting game. 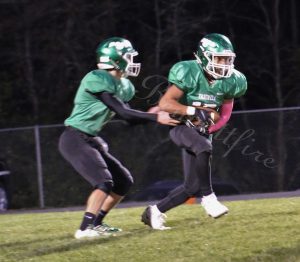 Marion is coming off a 38-0 home loss at the hands of the Richlands Blue Tornado.

First year head coach Tim Smith has his Scarlet Hurricanes sitting at 3-4 overall and 1-1 in the Southwest District standings.

Marion’s defense shined in the games against John Battle & Grayson County, allowing only 7 points total in the two games. However, in the win over Lebanon it was the Scarlet Hurricanes’ offense that stole the show.

In that game quarterback Tanner Tate orchestrated a last minute comeback as he drove the length of the field to put the ‘Canes up 41-38. The bruising senior quarterback accounted for all six of Marion’s touchdowns. Tate had four scoring strikes through the air and two on the ground.

Harrison Thomas, a 6’1″ sophomore, is one of Tate’s favorite targets in the passing game.

Will Moss, a senior offensive and defensive lineman, is one of the premier players in all of southwest Virginia. A state championship wrestler, Moss overpowers most of his opposing match-ups and is a player that has to be accounted for on each snap. 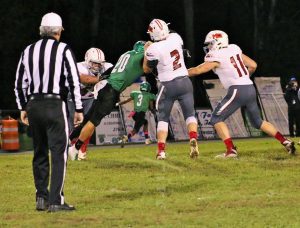 This will be 69th meeting between the two schools, with the Bulldogs leading the series 40-26-2. The winner will receive the “Dragon Bowl” trophy, pictured below. 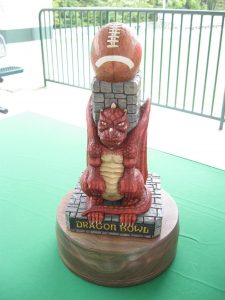