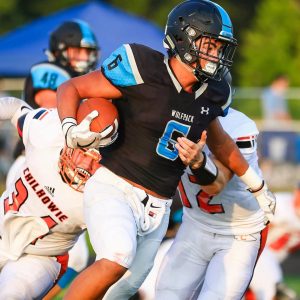 Coming off of a tough defeat at the hands of the Union Bears a week prior, the Ridgeview Wolfpack were expected to rebound in a big way Friday night.  They did with a resounding 44-6 victory over John Battle.

What was unexpected, however, was a bonus gift hand delivered to the Wolfpack after the final horn sounded on Battle Hill.  That unexpected gift was an announcement over the public address in the form of “Wise Central 21, Union 13. Final.”  As the Wolfpack players roared their approval, a renewed life was apparent on players and fans alike with the announcement.  The shocking upset by the Warriors over the Bears throws the Mountain 7 District title up for grabs between any of four teams.

Ridgeview faced little adversity on Friday night on Battle Hill in taking down the struggling Trojans.  Trenton Adkins scored all six touchdowns for the Wolfpack on his way to a 196 yard evening.  It took all of 90 seconds for Adkins to collect his first tally of the evening with a two yard plunge.  After a three and out by Battle, Adkins would strike quickly once again with a 35 yard run.

The Wolfpack defense would step up and make a big play on the next Trojan possession.  Freshman Cannon Hill intercepted the first pass of his young and promising career and returned the ball all the way to the Trojan five yard line.  Two plays later, Adkins had the hat trick from four yards out at the 6:14 mark of the opening stanza.

The Trojans would tally their only points of the evening on the ensuing possession.  Jack Thurston found Zane Poe streaking down the home sideline for a 65 yard touchdown strike on fourth and six at the 2:25 mark of the first quarter.

Before the opening quarter of play was finished, however, Adkins would score his fourth of the night from 42 yards away on a fourth and two.  At the end of the first, the Wolfpack were well in control, 27-6.

A Thurston fumble on the ensuing Trojan possession would turn the ball over to the Wolfpack.  Another Wolfpack scoring drive was capped off by Adkins, scoring his fifth from eight yards out.  With the contest well in hand, neither offense was able to get on the board for the remaining seven minutes of the half.  At the break, Ridgeview led the contest 34-6.

The Wolfpack starters only got one chance at possession in the second half, but Adkins capped his terrific evening with his sixth score from two yards.  With the 35 point margin and the running clock in play, neither team scored in the rest of the third quarter.

Ridgeview closed the scoring on the evening with a 24 yard field goal by reliable kicker Landon Knepp with 3:43 left to provide the final margin of 44-6.

Besides Adkins superb effort, there were other efforts worth noting.  Quarterback Nick Phillips had 56 yards rushing as well a 6-7 effort through the air for 51 yards.  Cannon Hill had three receptions for 16 yards and Alijah Sproles had one catch for 26 yards.

Next up for the Wolfpack is a critical Mountain 7 district contest this Friday with the Abingdon Falcons.  The Falcons will come into the contest undefeated in district play while the Wolfpack will be playing for no worse than a share of the district title with a victory.

Adkins, upon learning of the Union loss was excited.  “I’m excited about that,” said Adkins.  “We have the opportunity to play for a district championship next week.”  Phillips echoed those sentiments.  “I’m just looking forward to hopefully winning that championship,” Phillips said.  “We worked hard in practice this week, and we’re going to work even harder next week.  We really want to win that championship.”

The Trojans will look to end their slide back upon Battle Hill this Friday as Battle will host the Gate City Blue Devils in a must win game for both squads in the race for the Region 2D playoffs.