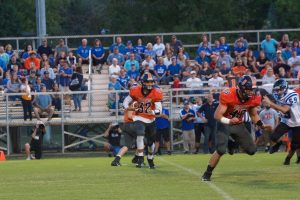 Big games are nothing new for the Union Bears football program. In fact, Coach Travis Turner and his players welcome the challenge.

“We have some guys on our roster that have played in a lot of big games here at Union. We’ve played in a couple big games this year against Richlands, Graham and even Gate City was a big one for us.” Said Senior Mason Polier. “So, I know we’re all working hard every day in practice to get ready for this last half of the season push.”

“One game at a time is the motto we use around here.” Said Union head coach Travis Turner. “We have some big games coming up but our focus and attention is on Paintsville. They’re one of the top teams in the state of Kentucky and it will be a great challenge for our football team.”

The Paintsville Tigers are the number 5 ranked class A team in the state of Kentucky. The Tigers sit at 3-2 with their two losses coming to number 3 ranked Hazard (23-14) and a one point loss to number 1 ranked Pikeville, 9-8. With a plethora of speed and athletes all over the field, the Tigers will present a challenge to the stingy Bears defensive unit.

“You’re going to see them in the spread. They have a lot of athletes that they can get the ball to. They use a lot of trips formation, their quarterback is really good. The back end of our defense has played well all year long, Daemi, Alex, Antwun and Malachi have been up the challenge every week. We have a lot of faith in those guys to make plays for us.” Added Polier. “They are obviously a good football team but so are we. They’ve played some good teams and only lost by one to the number one team in Kentucky, so, that game could have gone either way. We have a lot of respect for them as a football team.”

Dustin McKenzie (6’4, 335) paves the way up front for the Tigers. Running behind him and his fellow lineman is JW Phelps, a speedster that excels in both the running and passing games. Jaylyn Allen, who is committed to Eastern Kentucky, is a big bodied runner out of the backfield and is a defensive standout from his linebacker position. Nick Keeton (6’4, 195) is a big targer on the perimeter. Harris Phelps is an option at the receiver position for the Tigers as well. In last weeks loss to Hazard, AJ James took the snaps for injured starter Jake Hyden. If Hyden isn’t able to go then James will have plenty of options in the passing game.

Union is fresh off of a 28-14 victory over Mountain 7 rival Gate City. After a strong start that saw the Bears lead grow to 21-0 early in the second quarter, a couple turnovers and some inspired play from Gate City slowed Union down in the second half. Union has gotten strong play from quarterback Brody Gibson the last two weeks as he has thrown for 100-plus yards in consecutive games. Union will look to Polier, Antwun Jenkins, Zavier Lomax and Bryce Guerrant to pick up the dirty yards on the ground. The offensive line has done a tremendous job as they look to pave the way for yet another big game on the ground. Daemi Lester, Malachi Jenkins and Alex Rasnick continue to earn the trust of their quarterback in the passing game. CJ Jones, Polier and Trey Smith look to slow down the running game from the Tigers while the secondary, led by the Jenkins tandem, Rasnick and Turner look down slow down the high octane passing game.

Kickoff is set for 7 p.m. at Bullitt Park on Friday night.