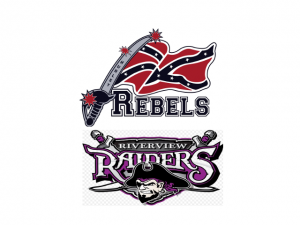 In a Battle of the Rebels a week ago, Hurley drew the short end of the stick. Mark Palmer won his first game against Hurley at the Cliff last Friday as Patrick Henry cruised to a 40-20 victory over Austin Cooper’s Hurley squad. The Buchanan County version of the Rebels outgained Patrick Henry in total offense 336-249. However, that was not enough to get into the win column. Matthew Blankenship churned out 134 yards on the ground for Hurley and a rushing touchdown. Chad Justice found Matt Justice on a 49-yard touchdown pass to lead the way for the Rebels on the night.

The loss to Patrick Henry marks Austin Cooper’s first as a head coach at his alma mater.

The Rebels will hit the road for the first time this season as they travel to Bradshaw, WV to take on the River View Raiders at Mitchell Estep Field.

The Raiders are currently riding a three game losing streak after its week one victory over Montcalm.

The most recent loss came a week ago when the Raiders welcomed Independence to McDowell County.

River View’s defense allowed the Independence rushing attack to gallop for 406 yards on the night.

River View compiled 155 yards on the evening. Jacob Justice accounted for 137 of those yards. It was the first time the Raiders had been shut out since last season’s 41-0 loss to in-county rival Mount View.

George Kennedy is in his second year at the helm in Bradshaw. Kennedy looks to guide the Raiders to their first win over a team from the Commonwealth of Virginia in the history of the program on Friday night.