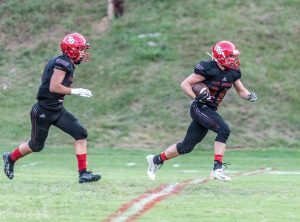 After the first two weeks of the season, the Twin Springs Titans are holding a 1-1 record.

After a 30-14 romp of the Northwood Panthers during week one, the Titans found themselves on the wrong end of a 43-6 defeat last Friday at the hands of the Holston Cavaliers. The Titans only trailed 12-6 at halftime against Holston, who saw their season end last year in the first round of the Region 1D playoffs to eventual regional runner up, J.I. Burton. Second year head coach Keith Warner was pleased with his teams fight.

“We played them tough in the first half, only down by six going into the locker room for halftime,” stated Warner. “They came out in the second half and ran the hurry up on us and we struggled defending them.”

Sitting at .500 the Titans set their sights on the Huskies from North Greene. The Huskies come in to the contest 1-2 overall with their lone victory coming against Unaka in week one by a score of 32-20. The win was Coach Andrew Murrays first win at the helm of his squad. Since then the Huskies have given up 42 points to Hancock County and 65 points to Unicoi County. Twin Springs will rely on the heavy running game spearheaded by running backs Corbin Kilgore and Connor Gilmer. Senior linemen TJ Taylor, Juan Matias and Kaleb Carter will pave the way for the running backs, as well as Sophomore quarterback Mason Elliott. Christian Hinkle and Freshman Ryan Horne also give Coach Warner two capable playmakers that he can rely on. Tyler Sanches leads North Greene on both sides of the ball. The Sophomore running back and linebacker has been their leading tackler through the first three games of the season. Wide receiver Hunter Hill gives the Huskies a big target on the outside that the Titans will look to contain.

“They’re fast.” Stated Coach Warner on the Huskies. “They’re going to present a challenge with their speed. They’re going to come out in the spread. Hopefully we can be physical and set the tone with our physicality. Thats how we’re going to go about all of our games, just come out and be the more physical team each and every Friday Night.”