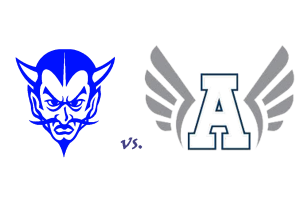 The Abingdon Falcons take their show on the road to Scott County to this Friday to take on the Gate City Blue Devils.

Gate City looks to build off their upset win over Richlands last week, while the Falcons look to pick up where they left off in their 45-14 week one win over John Battle.

Jeremy Houseright returned to his roots at Gate City this season as the Blue Devils’ new head coach and seems to pumped new life into a program that had been struggling in recent years.

Second Abingdon head coach Garrett Amburgey has the Falcons picking up where they left off last year on offense with a balanced attack and playing gritty, hard nosed defense on the other side of the ball.

New Falcons quarterbacks Jadon Boothe and Jake Puckett appear to still be in a battle for the number one spot.  Both produced well in the John Battle game and each provided a spark to the offense when called upon.  They both have the benefit of throwing to a talented corps of wide receivers, that features deep threat Peyton McClannahan, speedy slot receiver River Carter and freshman wideout Haynes Carter.  Booth & Puckett should have plenty of time to find their targets behind the Falcons’ massive line, anchored by offensive tackle Major Cook.  Look for running backs Martin Lucas, Eli Ratcliff and Malik Houndshell to carry the load in the backfield once again this week in Abingdon’s ground game.

The Falcon defense will hope to slow the Blue Devils’ tough ground attack with their aggressive front seven. Jake Johnson and Walker Wood look to hold down the middle from their inside linebacker positions while new outside linebackers Eli Ratcliff and Tyler Harless provide containment on the edge.  Major Cook and Dylan Hale are major contributors on the defensive line, while defensive backs Jadon Boothe, Haynes Carter, River Carter and Timmy Jessee will roam the secondary to slow down any air attack by the Blue Devils.

Falcons keys to the game:

Control the line of scrimmage

Abingdon moves to 2-0 in the Mountain 7 District this week, while Gate City picks up their first loss of the season.