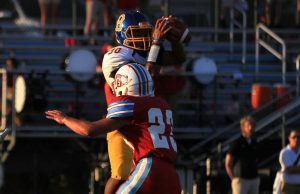 The sound of cowbells ringing and a train horn blaring indicated one thing in Pearisburg on Friday night; high school football had returned.

The Giles Spartans welcomed the Blacksburg Bruins across the county line for their traditional season opener. And for Blacksburg, the trip back across Brush Mountain on Friday night was a pleasing one.

Even though the Giles offense had success moving the ball in their trademark single-wing offense, the Bruins defense was able to keep the Spartans out of the end zone for the full sixty minutes, allowing Blacksburg (1-0) stroll off of Stephen C. Ragsdale Field with a 24-0 shut out victory.

Giles (0-1) won the coin toss and elected to receive the opening kickoff in typical fashion, but the Spartans’ first possession ended quickly as Blacksburg (1-0) forced an early three-and-out.

From there, first-year starting quarterback Luke Goforth wasted no time getting the Bruins on the board. Goforth, who finished the game with 151 yards through the air, connected with Karim Mohamed on the first play from scrimmage for a 47-yard touchdown pass. Blacksburg jumped out to an early 7-0 lead with 9:45 remaining in the first quarter.

After another failed Spartan drive, the Bruins struck again. Taking advantage of good field position for their second series in a row, Blacksburg meticulously drove deep into Spartan territory. Goforth threw for his second touchdown in the quarter, as he hit running back Brian Mitchell over the middle from 14 yards out. The Bruins lead 14-0 with 3:26 left in the first quarter.

Following the second Blacksburg score, the Spartans were finally able to get their single-wing offense moving. Giles chewed up eight minutes of the clock and found themselves inside the Bruins’ 25-yard line 14 plays later. However, the exhausted Bruin defense did not break and forced Giles to turn the ball over on downs after stopping tailback Chaston Ratcliffe for no gain on fourth down.

The hot Bruins offense took over deep in their own territory looking to score for the third straight possession. The Spartan defense, however, was able to keep Blacksburg from reaching the endzone by forcing a turnover, when Preston Whitlock intercepted a Goforth pass late in the half. The Bruins took a 14-0 lead into the halftime break.

Blacksburg received the second half kickoff and immediately marched down the field. The Bruins extended their lead to 21-0 on an eight yard run, in which Mitchell did his best Marshawn Lynch impression, breaking multiple tackles before plunging into the endzone..

The Spartans tried to answer back on the following possession. Giles went on another clock-chewing eight minute drive and made it down to the Bruins’ 10. With their backs against the wall, Blacksburg stood tough again and stuffed fullback Dominic Collini on a fourth-and-one play.

From there on, the Spartans struggled to cross midfield, and Blacksburg was able to tack on three more points in the fourth quarter after a 27-yard FG from Poland.

For Giles, Ratcliffe finished with 57 yards on 25 carries. He was 3-4 through the air for 42 yards. Collini rushed for 77 yards on 22 carries. Caleb Elliot, Nathan Sheetz, and Preston Whitlock all had one reception for the Spartans.

Giles will travel to Montgomery County next Friday to take on the Christiansburg Blue Demons.

Blacksburg with host Lord Botetourt on their home opener.