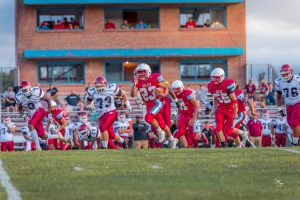 The 2018 season for the Spartans is one that many would like to forget. The single-wingers were faced with many adversities early in the season, including losing multiple starters to serious injuries. With a very tough schedule consisting of 4A powerhouse Blacksburg, the defending 2A champions Graham, and Three Rivers District forces Radford and Glenvar, the Spartans found themselves wondering if they would even make the 2A playoffs. While Giles was not expected to win those 4 games, the shocker of the season was a 34-28 defeat to James River, after the Spartans lead 28-0 at the half.

Giles finished the regular season at 5-5 and entered the 2018 playoffs as the 6th seed in Region 2C.  The Spartans unluckily drew Appomattox in the first round and for the third straight year, the Raiders ended Giles’ season early. The season ended with a 5-6 record, which was the first time since 1987 that Giles finished with a losing record.

2019 looks to be more promising for the Spartans. While the team only returns a handful of senior starters, they do return all of their backfield along with most of their defense. However, Giles must do without two-way starter Kip Green, who transferred to Radford to finish out his senior year as a Bobcat. 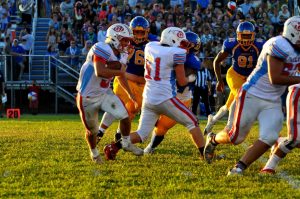 Leading the single-wing attack for the Spartans is senior Logan Greenway and junior Chaston Ratcliffe. Greenway finished the 2018 season with 783 rushing yards, but did not get to carry the ball until week 3 against Graham. Ratcliffe finished up his sophomore season with 564 yards on the ground. He also had over 200 yards passing for the Spartans, who aren’t known for putting the ball in the air much. The backfield also features senior Dominic Collini, who did not touch field until late in the 2018 season because of a pre-season injury.

The Spartans will have their hands full, as they play host to 4A Blacksburg in their season opener. While the Bruins are a much larger school than Giles, the two have played each other every year since 1961, only being separated by the Giles/Montgomery county line. 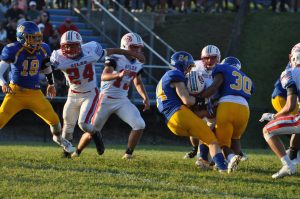 The Bruin defense shut the single-wing down in the 2018 opener, holding Giles to 7 points (photo by Shannon Lowery)

Blacksburg won the last two contest by a combined score of 101-21. The last time Giles defeated the Bruins was in 2016, the year that Blacksburg entered the playoffs at 5-5 and won the 3A state title. Since 2016, Blacksburg has a 24-3 record. They were projected to win the 4A title in 2017 and 2018 as they returned most of their starters both years, but was knocked out deep in their playoff runs both years. 2018 was their first 10-0 regular season record since 1976.

This season will feature multiple new bodies for the Bruins as they only return 3 starters on offense. Leaving with the large senior class in 2018 were gunslinger Grant Johnston and speedster Tiquest Terry. Johnston started as QB for the Bruins for three straight years. He was the Region 4D offensive player of the year. Tiquest Terry, who now plays football for Youngstown State, was another huge part of the Bruins success over the years as a shifty wide receiver.

Blacksburg will be lead by two quarterbacks, senior Luke Goforth and sophomore Parker Epperly. Both have big shoes to fill with replacing Johnston. The Bruins did return their speedy senior running back, Brian Mitchell, who rushed for over 600 yards last season for the Bruins last season. They also returned senior wide receiver Karim Mohamed. Mohammed caught 33 passes for nine TDs during the 2018 regular season.

Game will be played Friday at Steven C. Ragsdale Field in Pearisburg, Va. Kickoff set for 7:00.