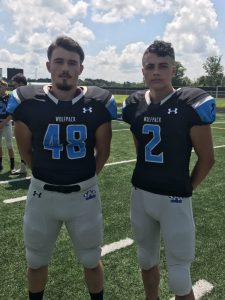 The high school football season will kick off in style on Thursday evening in picturesque downtown Norton, Virginia as the Ridgeview Wolfpack and J. I. Burton Raiders are set to do battle.

This will be the first ever meeting between the Wolfpack and Raiders on the gridiron, but there is a lot of familiarity between the coaches of the two schools.  Head coach Rick Mullins and assistant coach Kent Grant of the Wolfpack were coaches at now defunct Clintwood, once rivals of the Raiders in the Lonesome Pine District from years gone by.  Interim head coach Jacob Caudill of the Raiders also is familiar with his counterparts who will roam the sideline across the way on Thursday night.

Jaymen Buchanan, a sophomore will look to fill the void of sensational Raider quarterback Houston Thacker who has departed to graduation.  Buchanan should adapt rather nicely with Mikey Culbertson and Najee Steele returning in the backfield for the Raiders.

For the Wolfpack, Trenton Adkins looks to continue to impress the Mountain Empire and college coaches alike with his superior running skill.  Quarterback Nick Phillips will make his first career start behind center in the marquee matchup Thursday night, and Phillips will look to find Timmy Hess, Adkins or perhaps Kanin Lewis through the air.

Culbertson is also a stalwart on the defense from his middle linebacker spot for the Raiders.  The Wolfpack have Mountain 7 Defensive player of the year Alijah Sproles also at linebacker.

With Thursday’s matchup being the only contest on the docket, expect a large crowd to head to the heart of the Coalfields for a contest that promises to be hard hitting, smash mouth and pad popping.  Very reminiscent of those LPD battles between the Raiders and Greenwave once upon a time.

One thought on “Wolfpack, Raiders set to kickoff season in SWVA”