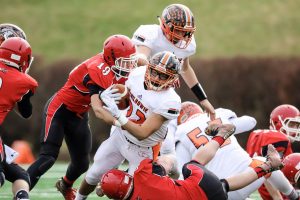 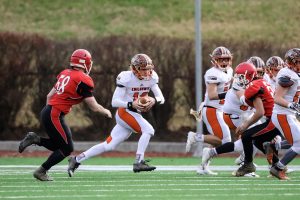 The mantra for the Chilhowie Warriors this season was “Unfinished Business.”

On the opposing sideline, the Riverhead Gladiators countered that statement to model their 2018 season after.

“We are not into hash tags and all that,” said Riverheads head coach Robert Casto.  “My kids always said #TakingCareofBusiness.”

“This was for all the marbles and we took them all,” Casto said. “I’m not sure what a hash tag is but that is what we did anyhow.”

A mere 56 seconds ticked off the clock before the Gladiators took the lead and never relinquished it. 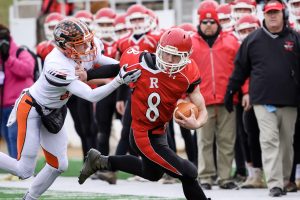 With 11:04 left in the first quarter, quarterback Justin McWhorter found fullback Moose Lee over the middle on a 45-yard strike to send the fans from Greenville into chaos. Lee found the end zone and after the Peyton Skillman PAT, the Gladiators took a 7-0 lead.

“We don’t pass very much, when we do we have to execute,” said a joyous Lee during the post game ceremony. “I used to be a fullback and my coaches told me to never turn around and look back. I wasn’t turning around and looking back on nothing. I’m slow enough as it is. I was just going to catch it and take it to the end zone.”

The rest of the first half proved to be a defensive stalemate. Both defenses resembled a heavyweight fight at Caesars Palace in Las Vegas. The Riverheads defense held the Chilhowie offensive attack to 53 yards while the Gladiator offense amassed 143 yards.

Knowing his team was receiving the opening kickoff, Chilhowie coach Jeff Robinson knew that his team had to make some noise in their opening possession.

“We had to do something offensively,” Robinson said. “That three and out killed us.”

The rest of the third quarter is one that Chilhowie fans won’t forget any time soon—for all the wrong reasons.

With 5:50 left in the third quarter, McWhorter found the end zone once again. This time via his feet on a 1-yard plunge. The Skillman extra point increased the Gladiators lead to 14.

17 seconds later, Jaden Phillips found the end zone when he intercepted a Zach Cale pass and raced 32 yards to the end zone to increase the Warrior deficit to 21. 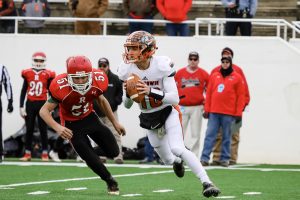 Chilhowie responded with a 1:25 left in the third quarter when Cale found Logan Adams from five yards out to put Chilhowie on the board in a state championship game for the first time since 1970. Riverheads led it 21-7.

With the Chilhowie score, momentum seemed to shift towards Smyth County for a quick second. However, Riverheads quickly regained the control of the hammer.

With 9:01 left in the contest, Phillips took it in for his second touchdown of the day. This time the bruising tailback from Riverheads plunged through into the end zone from one yard out to increase the Riverheads lead to 28-7.

The Gladiators damage was not done.

For the final time on a day in Salem in which the Gladiators had gold in their sights from the get go, Elijah Dunlap broke numerous tackles in route to a 40-yard gallop to the end zone. Skillman’s extra point put the cherry top and Riverheads completed the three-peat with a 35-7 win over Chilhowie.

The familiar celebration was on for those in red.

Moments after winning his sixth state championship at Riverheads, Casto echoed those statements about his senior class.

“51- 5 over a four-year period is unbelievable. That is a testament to their hard work. No one has given these kids anything. They’ve worked their tails off. A lot of people could sit back on what they’ve done in the past. They never did that,” said Casto. “They continued to work and to beat and to bang. What we do is pretty demanding, we don’t play basketball on grass, we play football the way it’s supposed to be played.”

When looking back at the past 48 minutes, Casto proudly reflected on his defense’s performance.

As for Chilhowie, their second consecutive trip to Salem ended with the same result. 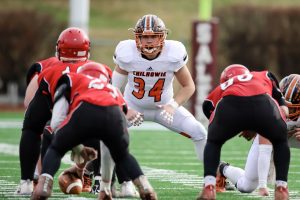 “There are a lot of other teams in the state that would like to be here today. I’m very proud of these guys,” said Robinson. “This group of seniors has given this town a gift the past several years. I am very proud to be apart of it.”

Robinson knew that his team was in the contest, but he also knew that he had very little wiggle room.

“We blew coverage (on the first Riverheads touchdown). That’s the only thing they got on us in the first half. I felt really good about it. The longer they had to stay out there it wore on us. That’s there game, that’s why they are three time state champions,” Robinson said. “I knew we had to keep it within one score. If they got up two scores on you, it was going to be tough. We couldn’t get anything going offensively. That pick six really took the air out of us. “

Even with a broken heart, Robinson praised the Gladiators.

“They are very good defensively. That is two straight years they have held us to seven points combined. I know how good our offense can be. That is definitely the difference in the game. They are so quick. You think you see holes out there in that defense, it closed quickly,” Robinson said. “There are no weaknesses. They do what they do extremely well. I felt like we were much better prepared this year for everything. I don’t know of anything we could have done differently.”

Chilhowie finishes the season with a program-best record of 14-1. However, the Warriors season will not be forgotten anytime soon.

“This group of seniors is just a special group. It is like a once in a career type group to come through,” Robinson repeated. “I was proud to have been here when they came through.” 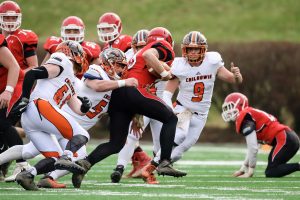