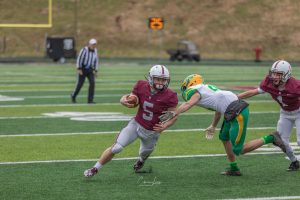 In 2017, the Region 1C championship between the Maroon Tide and Green Wave was a nail-bitter that ended with a 28-27 Galax victory. The two met up again in this year’s regional championship, but the Maroon Tide had control of this game before it even hit halftime. Galax (11-2) racked up 402 yards of total offense and held Narrows (10-3) to just 67 total yards of offense. Blake Brown rushed for 110 yards and three touchdowns to lead the Maroon Tide over the Green Wave 55-0.

Cole Pickett struck first for Galax as he connected with his go-to receiver Cade Ashworth from 25 yards out with 7:58 remaining. Narrows fumbled the ball on their next possession and Caxton Vaught recovered a fumble and ran it into the end zone, giving Galax a quick 14-0 lead. Brown extended the lead 21-0 when he blasted into the end zone from 35 yards out to close out the first quarter.

Pickett and Brown put the game out of reach in the second quarter. Pickett connected with Ashworth again for 24 yards and the score with 9:27 remaining in the half. Brown added two more scores from 21 yards and 5 yards to give the Maroon Tide a comfortable 41-0 lead at the break.

Narrows continued to struggle in the second half, with not even threatening to score.

Keaton Beeman and Brendun Bryson closed out the game with scores from 8 yards out and a yard out.

The Wyatt Freeman era has ended as the senior quarterback led the Wave to an impressive 21-5 record with two district titles. While Narrows came up short again in the regional championship, the Green Wave community will continue to flaunt their green and gold proudly.

Galax will travel to Warrior Stadium to battle the undefeated Chilhowie Warriors in the state semifinals in a rematch from last season.