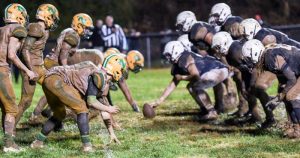 Two weeks ago, Narrows (9-2) lost their regular season finale on the road to Parry McCluer (7-4) in a mud bowl. The Wave, who are seeded second in Region 1C, battled back from a 28-12 deficit and took a 34-28 lead late in fourth. Marcellius Dawson scored for McCluer with under a minute remaining to top Narrows 35-34 and win a share of the Pioneer District title. The win also moved McCluer up from the sixth seed to the third seed. The Green Wave looks to avenge that loss as they host the Blues in the second round of the regional playoffs.

Both Narrows and McCluer won their first round playoff games in rematches from the regular season. Narrows defeated Auburn 18-7 in a low scoring affair while McCluer thumped Bath County, 44-13.

Wyatt Freeman lead the Wave over Auburn with 266 total yards of offense and two rushing scores. 74 of those yards came on the ground which is the most yards that Freeman has rushed for in a single game. He was 10-of-21 for 161 yards and three touchdowns in the first meeting against the Blues.

Dawson lead the Blues over Bath with 180 rushing yards on 20 carries and three touchdowns. He rushed for 118 yards and two touchdowns on 30 carries against Narrows in week ten. 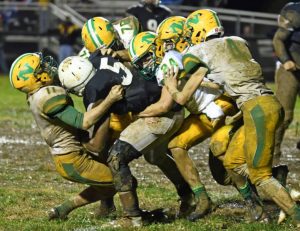 Narrows has the advantage playing at home. The Wave have an impressive 11-2 record at home since 2017. With Narrows being the only team in the county still playing, you can expect Ragsdale Field to be packed on Friday. The winner of this game moves on to the regional championship to face either Galax or George Wythe.