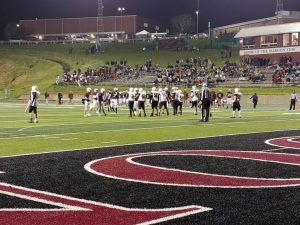 Cole Pickett threw four touchdown passes and ran for another to lead Galax (9-2) to a 55-8 victory over Eastern Montgomery (3-8).

When the post season gets here, you can expect Galax to turn it up a few notches. Since 2010, the Maroon Tide holds a 22-7 playoff record. The top-seeded Maroon Tide played host to the Mustangs for the first round of the Region 1C playoffs. While Galax was favored to win this game, they made it look easy, shutting the Mustangs out until the final two minutes of the game.

Pickett threw three touchdown passes in the first quarter. His first passing score went to Brendun Bryson from 14 yards out with 7:21 remaining. On his next score, he connected with Cade Ashworth for 30 yards with 2:30 remaining. Pickett closed out the first quarter with a 45-yard bomb to Matt Lundy. Galax led 21-0.

In the second quarter, not to be outdone by Pickett, quarterback Gage Cooke connected with Matt Lundy again for a 46-yard touchdown with 10:45 remaining. Bryson extended the lead to 35-0 with a rushing touchdown from 14 yards out. Pickett returned to the action to close out the half with a 43-yard touchdown pass to Cade Ashworth. Galax lead 42-0 at the break.

Pickett and Cooke gave their arms a rest in the second half, as they both scored using their legs. Pickett plunged it in from 5 yards out with 10:26 remaining in the third. Cooke scored from one yard out with 5:41 remaining in the fourth. Galax lead 55-0 until Devin Owens took the hand-off from the Mustang 36-yard line and ran it to pay dirt for the lone score with 2:59 remaining in the game. He also converted the two-point conversion for the Mustangs.

East Montgomery finished with 228 total yards of offense with 126 yards coming on the ground. Adam Bahnken, who filled in for Dylan Owens at quarterback, completed 7-of-14 passes for 102 yards. Devin Owens rushed for 109 yards on 18 carries and the only touchdown for the Mustangs.

Galax will host George Wythe in a rematch for the second round of the regional playoffs. Galax won the first contest 21-14.