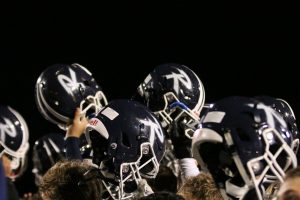 That’s what a collective fanbase did after the excitement of a thrilling overtime game had faded from Gene Malcolm Stadium.

Staring down the uprights, Levi “Fle” Forrest had missed his three previous attempts, including an attempt at a game winner just moments earlier.

This one was true, however, and it lifted Richlands to a 17-14 victory over Southwest District foe Virginia on senior night.

Richlands drove the field on their opening drive, only for Race Moir to be hit and fumble the ball in the backfield. A few plays later and the Bearcats had all the momentum and a seven point lead after and Aaron Rose touchdown run.

The Blues continued to have their chances throughout the first half, driving into Bearcat territory repeatedly, but never getting the points it needed.

Virginia High would take a 14-0 lead late in the 2nd half with more points off of a Richlands turnover, this time a Moir interception.

A missed FG at the end of the half for Forrest kept the score at 14-0 at halftime.

It didn’t get any easier for Richlands in the second half. Drive after drive stalled on offense.

The spark came on special teams. Logan Altizer broke through the line on a Bearcat punt and Richlands recovered on the 15-yard line.

One play. One pass. One score.

Moir found is favorite target Taylor Horn to cut the lead in half.

Both teams would trade blows on defense for the rest of the quarter and much of the first half.

After two more Moir interceptions, Richlands finally broke through with a pass in the flat to Jakob Cole. Cole slipped a tackle and raced down the sideline to tie the game.

Richlands would have one last chance in regulation, driving down to set up a 42-yard field goal attempt from the center of the field. But the attempt flew wide right setting up overtime.

The Bearcats held strong in on defense, forcing the Forrest 20-yard field goal to push the lead to 17-14.

After a stop on the backfield on 1st down, the Bearcats dropped back to pass on 2nd down.

A pass rush forced senior quarterback Jamie Lathrop to his right, and his pass was picked off by Sean Toney to seal the win.

With the win and a Galax win, Richlands (6-4) secured the fifth seed in Region 2D and will head to Grayson County to take on the 8-2 Blue Devils.

Virginia High ends their season at 6-4, and will head to No. 3 seed Graham on Saturday in Bluefield.