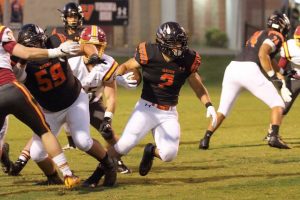 On Thursday night, the Virginia High Bearcats will make the trip north on I-81 for an important Southwest District game against the Marion Scarlet Hurricanes.

Each team enters the contest at 4-4 with Virginia High coming off a much needed 41-0 win at Lebanon, while Marion is coming off of a 34-20 victory over Tazewell.

These two teams actually played twice in 2017. In week 10, the Bearcats ended Marion’s hopes of an undefeated regular season with a 14-7 victory. Marion got their revenge just two weeks later by ending the Bearcats’ season in the first round of the playoffs by a score of 21-7.

This year’s matchup doesn’t have the hype surrounding it like last year’s but it is very important for playoff seeding. Currently, the Bearcats sit sixth in the playoff rankings. Depending on the final two weeks, they can move as high as the 5th seed, or fall as low as the 8th seed. Marion finds itself currently in the 8th and final spot in the playoff seeding. They can also shake things up for Region D with wins in their final two contests.

The Bearcats have been dealing with injuries as of late. They did receive some good news this week as their team captain, Aaron Rose, has been cleared to return after suffering a concussion two weeks ago against Graham. Rose will lead a hungry group of Bearcats into to battle Thursday night, along with Jamie Lathrop, Colton Ratcliffe, Cooper Gobble and Jalon Dingus. The Bearcats had high expectations at the beginning of the season, and are a surprising 4-4,  but a tough schedule, combined with key injuries haven’t helped the Bearcats so far. The Bearcats have lost to Tennessee High (7-3), Chilhowie (8-0), Abingdon (6-2), and Graham (7-1).

The scrappy Hurricanes, winners of three of their last four games, have fought their way back into the playoff race, after some early season struggles. Marion is led by head coach Joey Carroll. Coach Carroll has a multitude of weapons at his disposal. Nick Reese, Tanner Tate, Zach Richardson and Devin Hamm lead a battle tested group of Hurricanes who are looking to build on the success of the 2017 team that advanced to the second round of the Region D playoffs.

Both the Bearcats and Scarlet Hurricanes are ready to show everyone that the wide-open region in 2018 consists of more than just two or three teams, who are capable of advancing to the state semifinals.

Don’t forget, Bearcat fans, you can listen to the live broadcast of this week’s game from your favorite device at Spreaker.com/bearcatradio.

*Special note*   I would like to thank everyone in the region that reached out with messages of prayer and good thoughts for #2 after his injury. Thankfully, the Good Lord has seen fit to allow him to return to action this week. Thank you and God bless!