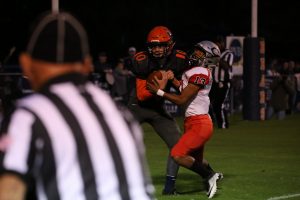 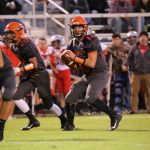 In most contests, it’s the Union Bears’ run game that gets all the publicity and scores all the points. That was not the case Friday night. Senior quarterback Bailey Turner tossed three first half touchdown passes on homecoming to lead Union (7-1, 3-1) to a 38-13 win over the visiting Wise Central Warriors (1-6, 0-4).

Turner’s first scoring strike came in the first quarter. He connected with Noah Garrison in the end zone from 15 yards out to give the Bears an early lead. On the ensuing possession, the Union defense forced the Warriors to punt. The Central punter gave return man Avery Jenkins a chance to return the kick.

That was a mistake. The speedster broke free and raced into the end zone from 66 yards out to push the lead to 14-0. The Warriors, relying on freshman back up quarterback Ethan Mullins, struggled to get any offense going. Mullins was forced into action because of the season ending injury to the original starter Isaiah McAmis.

After forcing another punt, Union again went to the air to move the ball. Turner threw a frozen rope to receiver Justin Falin from five yards out to give the Bears plenty of cushion. The Turner show was not quite over. As the end of the half was drawing near, Turner once again connected with Falin in the end zone, hitting the senior on a beautifully executed fade route. The long, athletic Falin soared over the defenders and brought in the throw to give the Bears a 28-0 lead at the half.

As per usual, Union coach Travis Turner started subbing generously in the second half. The starters played one offensive drive, punctuated with a six yard scoring run from fullback Mason Polier to enact a running clock. The final Union score of the night was a 38-yard field goal from the leg of Falin.

The Warriors got on the scoreboard in the fourth quarter, due to quarterback Ethan Mullins getting loose and finding the end zone from 48 yards out. The final score of the night came from running back C.J. Crabtree, as he hit paydirt on a 43-yard run to make the final margin 38-13. Crabtree was the most consistent weapon for the Warriors but the stingy Bear defense held Wise Central to 255 total yards.

Union is open next week before hosting conference foe Abingdon on senior night. Wise Central looks to get their first conference win as they travel to Jonesville to take on Mountain 7 foe Lee High.