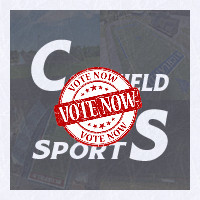 With so many great games each week to choose from, we’re going to need your help in selecting the Coalfield Sports’ Game of the Week! So while you’re here, scroll to the bottom to cast your vote for week eight!

In a series that dates back to 2001, the Blacksburg Bruins will visit Kenneth J. Dobson Stadium to take on the Pulaski County Cougars. Pulaski County currently holds a 11-7 advantage in the series.

Blacksburg comes into the game with a 7-0 record led by first year coach Eddie Sloss. The Bruins, who have impressive wins over Salem & Lord Botetourt, are led on offense by their senior quarterback Grant Johnston. Cordell Croy, Karim Mohammed and UVA commit Tiquest Terry are also playmakers for Blacksburg.

Pulaski County sits at 6-1 with their only blemish being a 29-28 loss to Northside in week one. Stephen James’ team is led by their do-it-all quarterback Cade Akers. Gage Mannon & Kent State commit E.J. Horton also help the Cougars put points on the board.

It will be the 41st matchup between these two teams when the Blue Devils make the trip to Harry Stuart Field to take on the Pioneers. Lebanon currently leads the series 29-10-1.

After losing their first four games of the season, Castlewood is riding a three game win streak into week eight. Quarterback Jacob Vance and tailback Brue Mullins are a big reason why the Blue Devils fortunes have been reversed.

Lebanon has went 1-9 in their last 10 games dating back to last season. That one win was a 7-0 win over their Russell County rivals from Castlewood. Michael Webb’s Pioneers go as Seth Stanley goes. The senior tailback is enjoying a monster season, despite the Pioneers winless record.

In the first ever matchup between the two squads, the Lord Botetourt Cavaliers will make the two hour trip to Mitchell Stadium to take on the Bluefield Beavers.

The Cavaliers from Daleville are cruising through the 2018 season with their only loss coming to the hands of Blacksburg, 35-28. Lord Botetourt is led by their talented backfield of Hunter Rice and Ethan Clower. Jake Dewease, James-Ryan Salvi, Preston Martin and Evan Eller also are capable players for the Cavaliers.

The 2017 state champion Beavers picked up right where they left off and are out to an impressive 6-0 record to begin the season. Fred Simon’s team, who have won each game this season by at least 24 points, are led by their senior quarterback Chandler Cooper. Cooper is joined in the backfield by Juice Edwards, JJ Davis and Arnold Martin. Isaiah Johnson, Drake Mullins, Sean Martin and Mason Walker are some other playmakers that should play a big role for the Beavers.

In a series that dates back to 1921, the George Wythe Maroons will travel south on I-77 to take on the Galax Maroon Tide. The Maroons currently hold a 32-21-4 lead in the all-time series.

A win for George Wythe would be their first over Galax since 2015’s 28-27 game. Coach Brandon Harner’s Maroons are led by their shifty quarterback Cole Simmons. Simmons shares his backfield with Ravvon Wells and Dayson McMillian. Jaquez Younger is a threat from his wide reciever position.

Galax is looking to go 5-2 on the season with a win over the Maroons. Coach Mark Dixon’s team is led on offense by first year quarterback Cole Pickett. Blake Brown is a mainstay in the backfield for the Tide. Joshua Spurlin excels from his wide receiver and defensive back positions.

In a series that was first played in 1941 when J.I. Burton was just “Norton High,” the Grundy Golden Wave will make the trek into the city of Norton to take on the J.I. Burton Raiders.

After dropping their first decision to Ridgeview, the Golden Wave have rattled off five victories in a row. The Wave are led by their do-it-all back Gabe Fiser. Fiser, a three time state champion wrestler, has close to 1,500 yards through Grundy’s first six games. Jacob McCoy and Derrick Endicott help guide the Golden Wave offense.

The Raiders are in a similar boat as the Wave, having dropped decisions to Region D powerhouses Union & Chilhowie, before picking up four wins in a row. Jim Adams relies on the leadership of quarterback Houston Thacker. Thacker, who is a multiple time CoalfieldSports.com Player of the Week nominee, threw the game winning touchdown pass in last week’s come from behind win vs. Honaker. Mikey Culbertson is a threat to go the distance from his tailback position as well.

Week 7 Game of the Week Poll