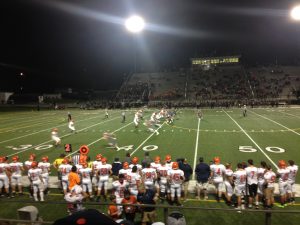 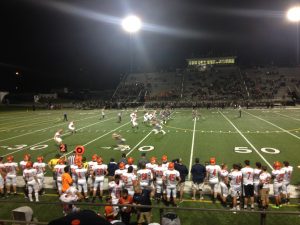 Fans of the Union Bears are accustomed to exciting games that aren’t decided until late in the fourth quarter. Friday was no exception. The Bears needed a late touchdown and a timely interception to secure an important road victory, 28-20.

The Trojans struck first when Zack Young found a wide open Grant Misenheimer in the end zone for a 47-yard touchdown reception to put West ahead 7-0. .

Union answered with a time consuming 80-yard drive, punctuated with a 15-yard touchdown pass from Bailey Turner to Justin Falin to knot the score up at 7. After forcing a turnover on downs near midfield, the Bears went back to the ground. Aaron Stidham scored from one yard out to give the Bears a 14-7 lead with little time remaining in the first half.

West did not go quietly into the half, driving to midfield and appearing to score on a 76-yard touchdown pass with 30 seconds remaining to tie the game. However, the play was called back because Young had advanced across the line of scrimmage before throwing. Union held on to a 14-7 lead at the half.

The Bears continued their ground assault on the first possession of the second half. A 15-play, 72 yard drive was capped off with a five yard touchdown run by Mason Polier to extend the Union lead to 21-7.

West wasted little time getting back on the scoreboard. After a long completion on a fourth down play, Young took it in himself from one yard out to cut the deficit to 21-14. After forcing a quick three-and-out, the Trojans added another score, this time a 4-yard pass from Young to Jamal Spralding. The ensuring extra point attempt failed after a bobbled snap and the Bears remained ahead 21-20.

That proved to be the last time the Trojans found the end zone. After the score, Union speedster Avery Jenkins got loose for a 54-yard touchdown run to give the Bears a 28-20 lead late in the fourth. West had one more chance to attempt to tie the game but their hopes were dashed when the Union defense snagged an errant pass from Young. The turnover allowed the Bears to run the clock out and head back to Virginia with a hard fought eight point victory.

Jenkins was the game’s leading rusher, scampering for 150 yards and a touchdown. Polier added 72 yards and a score, while receiver Justin Falin caught four passes including the 15-yard touchdown.

Morristown West was led by quarterback Zack Young, who threw for 212 yards and two touchdowns. Dominick Hazeltine led the Trojans with 69 yards on 22 carries.