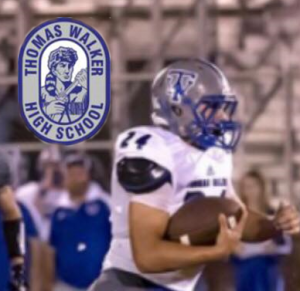 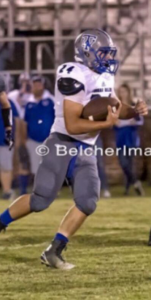 The Thomas Walker Pioneers were riding a two game win streak coming into their annual rivalry game with the Rye Cove Eagles.
Coach Nick Johnson’s team took that momentum across the Scott County line and extended their win streak to three with a 14-13 win over the Eagles from Duffield.
Neither team particularly lit up the scoreboard on offense in this defensive struggle, but one Pioneer defensive player shined bright on the night.
Sophomore Jaron Warf orchestrated Thomas Walker’s defense, coming up with one big stop after another, on his way to finishing the game with 10 tackles in the Pioneers’ one point victory. For his efforts, Warf was voted as the CoalfieldSports.com Defensive Player of the Week in week four.
“It is a huge honor for the fans of southwest Virginia to vote me in as defensive player of the week,” said Warf. “It is huge for our school, community and team to be recognized for what we are doing on the field.”
The Pioneer’s win made it three in a row on the season and three in a row over the Eagles. Although the Eagles came into this game with an 1-2 record, Warf and the Pioneers’ defense did not overlook Rye Cove’s big play abilities.
“We had to stop the run,” said the linebacker. “They have three really good backs who all run hard. We just wanted to tackle and keep from giving up big plays.”
That strategy paid off. Rye Cove finished with only 170 total yards on the night. Warf contributed his teams’ strong defensive effort to the preparation, discipline and effort.
“They looked about like we saw on film. They stick to what they do best in the wing T with power runs and misdirection,” Warf said “I just read my keys, and the defensive line did a great job of attacking and keeping me free to read and attack.”
Warf is affectionately referred to by the Thomas Walker fans as the “Minister of Defense.” For years that nickname has been synonymous with NFL Hall of Fame defensive end Reggie White. Some might say that Warf’s performance that night was reminiscent of the former University of Tennessee All-American.
Some may say that, but not Warf. Despite the award winning performance, he knows there is still room for improvement.
“I feel like I played decent, but I don’t think I played the best that I could play. In the first half, I tackled high a few times and didn’t get the man down,” said Ewing’s Minster of Defense. “We adjusted at halftime and played better.”
That halftime adjustment was definitely needed. The Eagles, led by the hard running of Matthew Hardin, held a 13-0 lead in the third quarter before Wesley Gilliam’s 86-yard kickoff return ignited the Pioneer comeback attempt. Logan Ely’s 62-yard touchdown catch on Thomas Walker’s next  possession brought the game to a tie. Leon Grohmann’s extra point split the uprights to give the Pioneers the lead. Both defenses held strong in the final quarter & the Pioneers escaped Duffield with a hard fought 14-13 victory over their rivals.
“We knew it was going to be tough. Rye Cove is very improved. The crowd was into it all night so it made things fun,” said the Thomas Walker sophomore. “I just want to build on that game and continue to improve each week and help our team get to where we want and that is a district championship.”