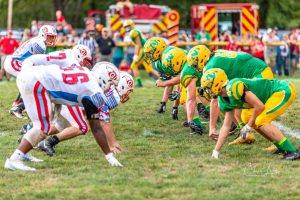 Narrows (3-1) was just minutes away from ending their 15-game losing streak to their county rivals, Giles (2-2). However, Giles’ Logan Greenway defeated the Green Waves in the final minute.

Greenway rushed for 147 yards and led the Spartans to a 12-7 victory over the unbeaten Green Wave. Greenway, filling in for Chaston Ratcliffe who was limited due to an injury, scored the game winning touchdown with less than a minute remaining. 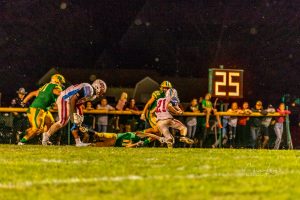 It was an intense atmosphere at Harry Ragsdale Field for the county clash. Despite it being a Thursday night game, the Spartan and Green Wave faithful filled the stadium before kickoff. Hundreds of fans stood in line through the entire first quarter before finally making their way into the gate.

Narrows won the toss and elected to defer until the second half. Giles looked to strike quick with their high powered single-wing offense but the Narrows defense stood tough. The Narrows sideline came alive after forcing Giles to go three and out on their first drive. You could feel the momentum shift to the boys in green.

The Spartan defense, not to be outdone by the Green Wave, kept Narrows from converting a first down on their first drive. What happened on Giles’ next possession doomed them for the next three quarters. 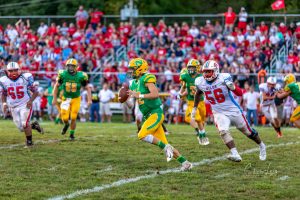 On a third and long inside their own 25-yard line, James Lyles took the ball on a reverse but took a hard hit. Narrows’ Slater Ferguson and Chase Blaker delivered the blow to Lyles, forcing the ball to go straight into the air. Cole Needham snatched the ball and sprinted 22 yards into the end zone for the first Green Wave score of the night. Narrows led 7-0 late in the first. 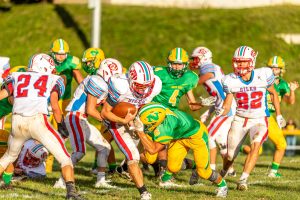 The defensive battle remained throughout the third quarter. Neither team crossed the 50-yard line. The closer it got to the fourth quarter, the Spartan fans began to look worried, but the players and coaches never showed signs of panic.

Giles finally got their offense going early in the fourth.  Hunter Williams, who was kept in check most of the night, found a hole and dashed 66 yards for the Spartans first points of the night. Placekicker Jacoby Wilson made the extra point but it was negated due to a procedure penalty.  His second attempt went wide right and was no good. The home side squalled out with cheers after the missed extra point. 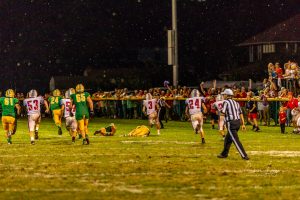 Clinging to a one point lead, the Green Wave knew they had to keep the ball as long as possible and get an offensive score. Giles knew that time was running out and they needed to force a quick three and out. The Spartans did just that. Narrows had to punt the ball back with 5:54 remaining.

Giles started its game winning drive on the Narrows 43-yard line. After not converting on third down, the Spartans found themselves in a 4th and 4 situation. Giles lined up in a different formation forcing Narrows head coach Kelly Lowe to call a timeout. The timeout actually helped Giles and gave them more time to draw something up. Greenway carried the ball around the weak side and picked up 24 yards to set the Spartans up with a first and goal at the three yard line. Greenway finished the 10-play drive with a  one yard touchdown plunge. Narrows shut down the two point conversion but found themselves trailing 12-7 for the first time with 56 seconds remaining.

Wilson squib kicked it down inside the 30-yard line. Narrows only had 47 seconds to cover 70 yards. After a 25 yard completion from Green Wave quarterback Wyatt Freeman to Blaker, Narrows was in Giles territory. Giles had great coverage the next three plays, forcing three incompletions. With 10 seconds remaining on a 4th and long, Freeman attempted a pass to Chase Blaker, but it was broken up.

The train horn from Giles started blaring and confetti sprayed everywhere on the away side. Giles extended its win streak to 16 over Narrows. 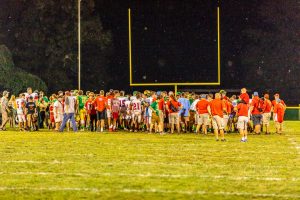 The Spartans will host Floyd in their next game. Narrows has an open week.