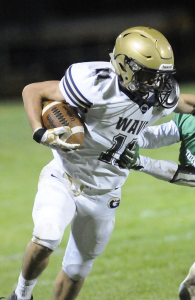 The past two weeks in Buchanan County have been filled with talks about how Grundy tailback Gabe Fiser has broken the school record for rushing yards in a game in back to back weeks.

However, after Grundy’s 43-14 win over Lebanon, there was a lot of chatter about Golden Wave WR/DB Jake McCoy.

The Grundy junior had a stellar night on both the offensive and defensive side of the ball against the Pioneers. Offensively, McCoy reeled in four passes for 92 yards and a touchdown. However, his two interceptions and a 59-yard interception return to the crib gives him the nod as the CoalfieldSports.com Defensive Player of the Week for week three.

“It feels great to be the CoalfieldSports.com player of the week. It’s a great achievement for me,” McCoy said. “I thank God for keeping me healthy and injury free these first three weeks.”

After a strong performance against RiverView in week two, the Golden Wave knew it had to bring that same edge with them back into the Commonwealth if they wanted the same success against Lebanon.

“We had a very strong mindset coming into the Lebanon game. We were all ready and prepared to play,” McCoy said. “We knew coming into the game we would have to play hard and give it our best on the defensive side. We approached very strong on defense, they had a lot of pressure on the quarterback so we could stop runs and cause bad passes to intercept.”

The pressure must have worked quickly. On McCoy’s first interception, he made an acrobatic one-handed grab to put the ball back in the hands of Gabe Fiser and the Grundy offense early in the first half.

Not long after, McCoy found himself looking for some more thievery. In the second quarter, McCoy picked off another Lebanon pass. This time, McCoy took off from 59 yards out to put Grundy up 27-0.

“I caught the ball and knew I would have to find a blocker,” said the 6-foot-185-pound junior. Once I found my blocker, I mostly let him do most of the work while I stayed on my feet.”

Later in the second quarter, McCoy saw the stock in his first half performance rise in Russell County. This time, McCoy was on the receiving end of a 13-yard pass from Grundy quarterback Derrick Endicott to put Grundy up 36-0.

“The feeling was good when I caught the ball for a touchdown thrown by Derrick,” McCoy noted. “He has really improved over the years with his consistency and overall has been proving to be getting better each week.”

After two big statements in consecutive weeks, The Golden Wave takes their 2-1 record into an off week. Grundy, as well as their week five opponent Honaker, have an extra week to prepare for each others showdown at Nelson Memorial Field next Friday. Anytime there is an opportunity to have extra time before the opening your district slate, it will be taken with open arms.

“We have a lot on our mind going in this bye week,” McCoy said. “We know we have to work hard coming into next week’s game.”

As for the rest of the season, much like Gabe Fiser said last week, McCoy looks to lead this Grundy team to continued success this season.

“I plan to continue to work hard and do my best on the field,” said the Grundy defensive back. “I have a great bunch of kids I play with that always help me on different stuff. I just look to improve on what I’m doing to get better.”